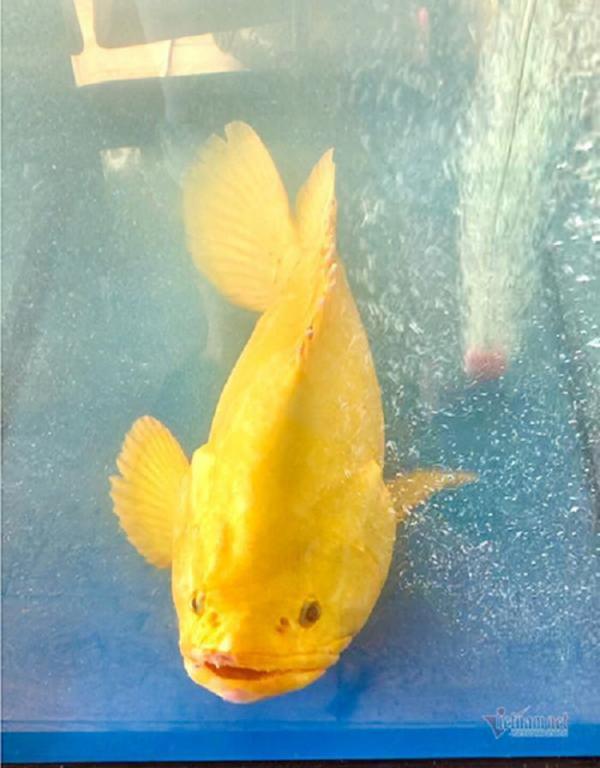 Information that a person in Vinh City, Nghe An released the mutant golden grouper (golden grouper) back to the sea made many people surprised. It is known that the value of this rare fish is up to billions of dong.

When he saw a grouper with its entire body golden, there were some areas of peeling on his skin and mouth, without much thought, Mr. Son decided to buy a fish more than 5kg with the price of 3 million VND to go home to raise. The length of this grouper is about 60cm, weighing 5.5kg. After buying the fish, Mr. Son put the fish in a glass tank as a pet.

Watch Video: Vinh City: The man released the billion dollar golden grouper back to the sea Within 15 days of raising the golden grouper, Mr. Son received many requests from customers everywhere, even Cambodia offered to sell the fish, the price was up to billions of VND but he still did not agree. Italy. However, raising marine fish as a landscape is not as easy as he thought. Every 3 days to change the water once. Finally overcoming material interests, Mr. Son decided to release the fish to the sea.

This is a natural sea grouper that people usually eat but this fish has a golden color for the whole body due to a mutation, so it is especially rare. Very few cases of golden mutant grouper have been recorded in the world. Along with king crab, red caped shrimp and grouper, grouper is also on the list of rare and high priced seafood (nearly 1 million VND / kg). Adult grouper usually have a body length of 50-75cm, weighing about 12kg. The most special feature in grouper is the ability to change sex. Strictly speaking, grouper is hermaphrodite. Initially they are male and change into female in the second half of the life cycle. Grouper is a fierce fish that grows very quickly. Today, this rare fish has been successfully raised in several countries around the world, including Vietnam. Of all grouper, the red grouper is a rare species that only lives in saltwater environments in coral reefs. The remaining types appear quite popular.