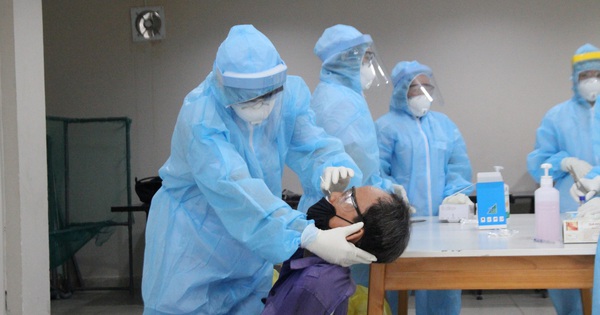 At a press conference on the situation of the Covid-19 epidemic in Ho Chi Minh City, Mr. Duong Anh Duc, Vice Chairman of Ho Chi Minh City People’s Committee said that the next week is an important time to stop the epidemic, individuals and units Failure to do so will be handled.

Responding to a reporter’s question about whether the city would apply directive 15 or 16, Mr. Duc replied that in fact, Ho Chi Minh City is applying directive 15+, and next the city will add a number of regulations, which will With regulations eased for reality, some regulations will be tightened to strictly implement the distance, minimize the spread.

At the same time, add some professional measures to ensure effective epidemic suppression.

The most important of which is to increase the testing capacity of the city’s health system to 500,000 samples per day to quickly scan dangerous areas. Focus on scanning areas that are assessed as potentially high-risk, with high F0.

At this rate, TP expects after a week, it will see clearly and fully identify potential, undetected, and untested risks. And there are conditions to return to testing places that have been screened before, because today’s negative test does not mean that the next day there will be no risk of being positive.

“Screening has to be done regularly and continuously. But that doesn’t mean that a million people have to be scanned all at once, but samples must be taken to be representative, scientifically planned, minimized. Most of the work is omitted but uses moderate funding. The city is determined to more than double its testing capacity compared to the previous time,” – Mr. Duc emphasized.

In addition, the City People’s Committee on June 23 will submit a proposal to the City Council to issue a resolution to have a new support package for difficult people and businesses. The city government always cares about the difficulties of people and businesses, the city also wants people to cooperate thoroughly with the city’s forces to fight the epidemic. In the right spirit, each citizen is a soldier, each neighborhood is a fortress.

Regarding the supply of goods and necessities, Mr. Nguyen Nguyen Phuong, deputy director of the Ho Chi Minh City Department of Industry and Trade, informed that the department has worked with the Department of Transport to remove difficulties in goods circulation. from provinces to Ho Chi Minh City.

Specifically, freight vehicles are given priority to circulate 24/24 on all roads in Ho Chi Minh City. These two departments will coordinate to get the priority certificate for the business within 2 hours from the date of the proposal.