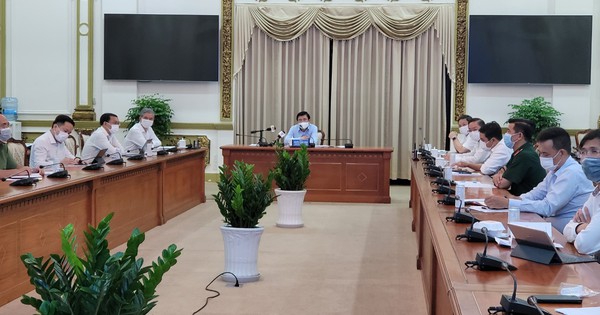 Overview of the online meeting of the Steering Committee for Covid-19 prevention and control (Photo: Hai Yen)

The city has established 69 patrol posts at the city gateways, of which 12 are at the city level and 57 are in the districts and Thu Duc city.

According to Mr. Duc, since yesterday (May 16), the People’s Committee has created an information group with districts to promptly exchange and share information on high-risk cases.

At the meeting, Mr. Ngo Minh Chau, Vice Chairman of the People’s Committee of Ho Chi Minh City, also said that starting from 0:00 on May 15, the forces deployed to re-establish the roadblocks at the gateway. More than 28,000 turns of people with more than 12,000 vehicles are controlled at checkpoints and stations.

“Through the inspection, people agreed with the policy of the city and obeyed it well. However, in the early days, there were still some cases of not wearing masks and being reminded, everyone also complied. Next time, after 3 days of reminding, the groups will strictly punish those who do not wear masks,” Chau said.

Speaking at the meeting, Mr. Nguyen Thanh Phong requested that first of all, to persuade business establishments to cooperate against the epidemic. However, if an establishment violates many times, the license can be withdrawn.