HCM City People’s Hospital 115: Expanding the medical map of Vietnam to the world 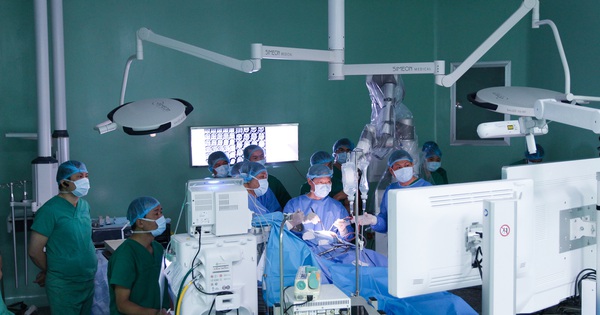 Formerly known as the Military Medical Institute with only 200 hospital beds, after 30 years of development, up to now the 115 People’s Hospital (Ho Chi Minh City) has become a grade I general hospital at the central level of expertise and technology with 1,600 beds, 2,500 officers and employees; Every day, 6,000 patients receive medical examination and treatment.

Dr. Phan Van Bau, Director of People’s Hospital 115, said that compared to the initial reception of 200 hospital beds and 200 medical staff with some old equipment, so far the hospital has changed. extremely impressive, being the first hospital in Asia to successfully operate a brain tumor with the Modus V Synaptive Robot system, becoming an important mark on the world medical map.

Hospital in collaboration with Gia An 115 Hospital is the first unit in Vietnam to deploy RAPID software in diagnosis and treatment of brain stroke. Each year, the BV treats nearly 20,000 stroke people. So far, 89 have been transferred and helped to build 89 out of 93 stroke units across the country …

Specialist BS II Tran Van Song, Deputy Director of People’s Hospital 115, added that the hospital is also a “headwind” place for emergency reception from only receiving less than 100 cases / day, now this number is over 400 cases.

Many special techniques have been deployed such as: Absorbent dialysis for treatment of severe acute poisoning, surgical anesthesia for the patient in a sitting position, monitoring of cardiac output by PICCO technology, artificial liver and kidney, model for the closed treatment of kidney diseases (the number of large-scale hemodialysis patients at the hospital currently ranks second nationwide, is one of the two largest kidney transplant units in the South).

Cancer Center – Nuclear Medicine of BV has capacity to treat multimodal patients throughout the country with the number of more than 30,000 people up to now.

According to Dr. Phan Van Bau, to get results today, BV always focuses and has a long-term strategy to develop human resources. It is the goal of building and training a contingent of thoughtful scientists and experts who have been respected by the health sector in the country, the region and the world, and known through many scientific research projects. the successful application of modern and advanced techniques to medical examination and treatment. The hospital has trained and transferred hundreds of new techniques to lower levels and hospitals in provinces and cities nationwide.

The successful implementation of the “Institute-School Model Pilot Project” between People’s Hospital 115 and Pham Ngoc Thach Medical University is a bright spot in the training of health human resources. The hospital has become a practice base for thousands of students in the health sector of the city and the country, actively contributing to the development of health human resources.

“Achieving today’s achievements is a long journey of striving for generations of officers and employees of People’s Hospital 115, overcoming many difficulties and challenges; especially the past 2020. coping with the whole country, coping with the Covid-19 epidemic and many other social and economic upheavals The title of Labor Hero in the doi moi era was a huge reward for the contingent of health workers, public employees, employees of BV “- Dr. Phan Van Bau admitted.

Assessing the achievements of People’s Hospital 115, Vice Chairman of Ho Chi Minh City People’s Committee Duong Anh Duc praised the achievements of the hospital staff, in which many advanced technologies were developed into treatment. The Vice Chairman hoped that the hospital would continue to develop, becoming an intensive medical center, preventing dangerous epidemics, contributing to the care, protection and improvement of the city’s people’s health.

Awarded to the People’s Physician and Excellent Physician