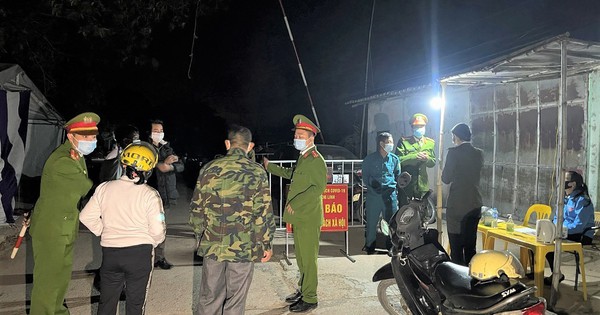 According to the epidemiological investigation, Mr. Đ.VH from Da Nang to Noi Bai on flight VN160. The flight departs at 10:46 am on April 29, arriving Noi Bai airport at 12:10 p.m. on the same day.

At 13 o’clock of the same day, Mr. Nguyen took a taxi from Xuan Quynh company from Hanoi to Hai Tan, Hai Duong city. On the trip there were 5 people (Mr. H., driver, 2 people in Binh Giang district, 1 person in Hai Duong city). At about 15 o’clock, Mr. H. took bus number 09 from Hai Tan to go home in An Nhan Dong area, Tu Ky town, and met his family members.

At 7:30 on April 30, he went to eat with 7 friends at Trung Kien hot pot restaurant in An Nhan Dong area (near CTECH Plaza supermarket). After that, he went to drink sugar cane juice at the gate of Tu Ky High School and went home.

On May 2, Mr. H. learned that 2 Chinese experts were positive for SARS-CoV-2 with flight VN160, so he took the initiative to make a medical declaration at the Tu Ky Town Medical Station, Tu Ky district. .

After that, Mr. H. was sent to isolation to concentrate at the Department of Infectious Diseases, Tu Ky District Medical Center. On 3-5, Tu Ky District Health Center took samples for the first test and sent them to CDC Hai Duong for testing. On 4-5 days, this case had a suspected positive result for SARS-CoV-2.

As soon as there are suspicious results, CDC Hai Duong took the test sample and sent it to the Central Institute of Hygiene and Epidemiology for a confirmation test, and at the same time transferred Mr. H.’s case to Hospital for Tropical Diseases of Hai Duong province for treatment .

Along with that, Hai Duong province authorities have tracked 18 contact cases near Mr. H., of which, 11 people had negative results 4-5 times a day.

Mr. T. entered Vietnam on the night of April 29 on flight VJ5103 from Japan, and landed at Noi Bai airport. The delegation had 46 guests divided into 2 cars with 47 seats moving from Noi Bai airport to medical isolation at room 309, Purple Lotus Hotel, Hai Duong City (Hai Duong Province) at 4:00 on April 30.

As soon as there are suspicious results, CDC Hai Duong took the test sample and sent it to the Central Institute of Hygiene and Epidemiology for a confirmation test, and at the same time transferred the above case to Hospital for Tropical Diseases of Hai Duong province for treatment.