Ha Noi proposed to buy 15 million doses of Covid-19 vaccine, given 2 doses of vaccine for people over 18 years old 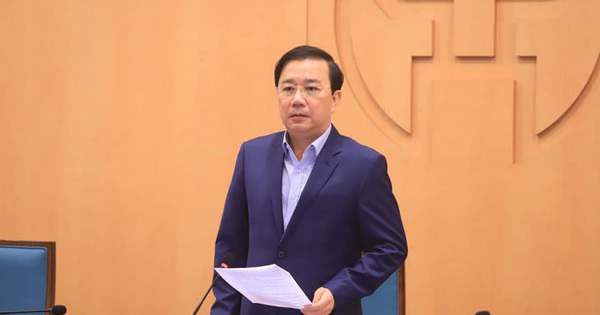 On the afternoon of February 22, Mr. Chu Xuan Dung, Vice Chairman of the People’s Committee of Hanoi, Head of the Covid-19 Hanoi disease control board, chaired the online meeting with districts, wards and communes.

Reporting at the meeting, Mr. Hoang Duc Hanh, Deputy Director of the Hanoi Department of Health, said that so far the whole city has only 4 quarantined points, it is expected that by the end of February, these points will also be removed. If the epidemic situation in the area at the end of February continues to be controlled, there are no new cases or complicated developments, the city may consider easing measures to prevent and control epidemics in early March such as : Returning students to school; festivals held, relics opened …

Therefore, relevant departments such as Education and Training, Department of Culture and Sports, Department of Industry and Trade … must always be ready to direct and ensure operations in the new situation.

Notably, Mr. Hanh reported: “Through the review, the unit advised the Hanoi People’s Committee to send an official letter to the Ministry of Health asking for support to purchase. Vaccine Covid-19 room for injection to people. We propose to the city to send documents to buy about 15 million doses of vaccine for 2 injections for each citizen aged 18 years and over “.

At the meeting, Mr. Chu Xuan Dung asked the Department of Industry and Trade to answer that many people in the capital are working hard to help Hai Duong people consume agricultural products, what work did the department do to ensure epidemic prevention. ?

Representative of the Department of Industry and Trade said that, implementing the direction of the Hanoi Party Committee Secretary Vuong Dinh Hue, the department has connected 32 commercial enterprises, 34 markets in Hanoi with 59 production and purchasing units from Hai. Ocean; coordinating with the Department of Transport, City Police to create conditions for vehicles to transport agricultural products into the city. Over the past few days, the units have purchased and consumed nearly 400 tons of agricultural products. The units of the city are also rapidly supporting the consumption of more than 1,600 tons of Chi Linh hill chickens in the coming days.

Mr. Chu Xuan Dung noted that in the past few days, the city still received complaints about the lack of positivity in the prevention of epidemics such as: The beer restaurant does not perform spacing, sold over the pavement … and the city must direct the treatment. right. “The districts must be more serious, more active otherwise it will affect the general work of the city. In the near future, if the requirements are relaxed, they must be more tightened. Localities, community Covid-19 groups. It is necessary to strictly comply with the requirements of the Central and the direction of the city. Avoid just mentioning the job “- Vice Chairman of Hanoi People’s Committee directed.

The units must carefully review the blockade points for risks, based on the test results, the scientific basis to consider removing the whole blockade or keeping a part; After having results of human testing from epidemic areas, units need to soon develop specific plans to continue expanding testing in industrial parks, hospitals, clinics, and centralized isolators; specific random sampling by region, quantity, priority order; have to report the plan to the city leaders … “This is something that needs to be done early to review the risk assessment” – Vice Chairman of Hanoi People’s Committee stated.

The Department of Health implements the process, management and medical declaration according to the new guidance of the Ministry of Health on scanning QR codes at public agencies and places. How can people support implementation especially in the near future we can relax measures when the epidemic is under control.

“On Saturday, Hanoi has not recorded more Covid-19 cases, the city is considering gradually removing restrictive measures to prevent epidemics. Departments must have a plan, a full risk assessment to propose for solutions so that businesses can return to operation, no later than 17:00 on next Thursday, there must be a report for the city leaders to consider “- Vice Chairman of Hanoi People’s Committee requested.