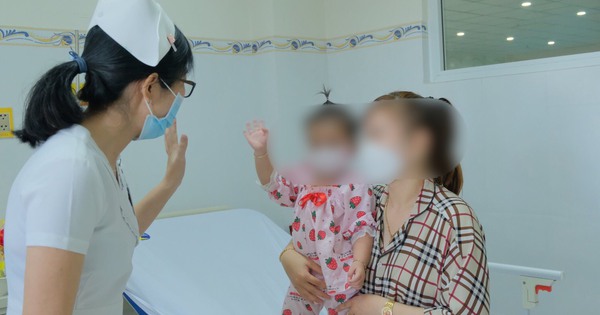 The girl was taken to the emergency room at Tay Ninh Xuyen A General Hospital in a state of restlessness, cyanosis, skin rashes, increased heart rate, SpO2 decreased to 78%, diarrhea.

Pediatricians of the hospital conducted a consultation to determine that the baby had grade II anaphylaxis due to Augmentin antibiotic. Immediately, the baby was treated by doctors according to the anaphylactic shock protocol of the Ministry of Health.

Doctor Nguyen Thi Quynh Tram, Head of Pediatrics Department of Xuyen A General Hospital, said that when she was hospitalized, the girl was in a critical condition. After 72 hours of being monitored and treated at the Pediatric Department, the patient gradually recovered, the skin was pink, the skin was pink, there was no rash, there was no fever, the limbs were warm and eating was better, hemodynamic stability was stable, and he was discharged from the hospital.

The girl gradually recovered after 72 hours of treatment for anaphylaxis because of an antibiotic allergy. Photo: BVCC

“Recently, the hospital has received many cases of children allergic to antibiotics and some cases of anaphylaxis. Antibiotics are the leading cause of anaphylaxis for patients. such as intravenous injection, intramuscular injection, oral … or topical drugs all have the same risk of causing anaphylaxis. Therefore, parents when giving drugs to their children must monitor closely,” – Dr. Tram emphasized. strong.

Dr. Tram said, anaphylaxis can occur immediately after exposure or can occur later after a few hours. Without expertise, early detection, timely diagnosis and treatment will lead to an increased risk of death.

“Therefore, when a child shows signs of a serious allergic reaction, especially if the child has difficulty breathing or changes consciousness after taking certain medications, parents need to quickly take the child to the medical facility. nearest hospital for timely emergency treatment,” recommended Dr.