Farmers in Hai Duong were miserable in their hearts 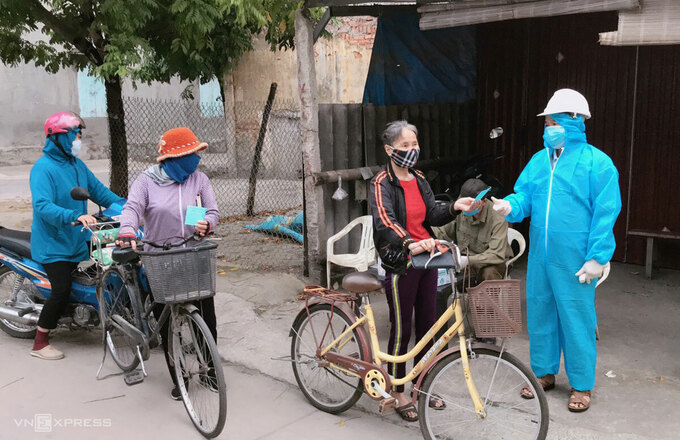 Because of Covid-19, Ms. Dung has not been able to sell a single egg, although chickens on the farm produce more than 10,000 eggs a day.

Describing the trade situation in the heart of the Covid-19 epidemic, Ms. Do Thi Dung, the owner of the egg farm in Cam Giang briefly: “At the beginning of the year, the eggs overflowed the whole farm but could not sell any”. Ms. Dung’s chicken farm has 18,000 children, of which 13,000 are in the reproductive period, providing 10,000 eggs per day.

Compared to last year, she said that since the 2nd, there was a car parked in front of her shop to pick up and transport to other provinces. “Now a sale is still difficult,” she lamented. Cam Giang is the translation of Covid-19 of Hai Duong. Expected on the 4th day of opening the goods of Ms. Dung considered abandoned.

“It was not until yesterday that my family could handle a few eggs,” she said, and said the egg farms decided to donate 30,000 eggs to the province. Particularly, she was given the priority to get nearly 20,000 eggs because her neighbors injured her in an accident and stayed at home for the year.

“Raising a profit is not a problem, I just hope the epidemic will be over so that we can sell goods. What can be done three times a year,” she said. The middle-aged woman also compares, if the civil servant loses his job only without a job and no salary, and the business people like her, the job still has to do it again, losing money, sometimes even losing 15 million dong a day.

“People of Chi Linh raised chickens to sell for Tet, but the epidemic was caught, so far they have not sold them all,” he said, explaining that due to the difficulty of traveling, the industrial zones and boat markets have not been operating yet, causing the chickens to be dull.

In fact, the number of chickens raised this year has decreased by 20% from the previous year. The longer the hard work, the more loss. He calculated that each factory chicken needs 4 months, costs 140,000-150,000 VND per chicken. The extended time period causes the care cost to increase while the value of the chicken remains the same.

Difficulty of transporting and traveling also makes enterprises and livestock raising households become more cautious. Mr. Tran Van Thien, a fish farmer in Nam Tan, Nam Sach, said that before the epidemic, there were more than 50 vehicles entering the Nam Tan area every day to collect goods for transportation. At this point there are only a few vehicles scattered. Tens of cages raise red snapper, the mausoleum of his family in the neighboring village, a few kilometers from home. “It is difficult for us to feed the fish, let alone transport the fish,” said Thien.

Mr. Thien added that a cargo truck must go through 3-4 quarantine points to get out of the province. Vehicles must also meet many permits and strict inspection to be allowed to move. Not to mention, many neighboring provinces have information that they do not receive seafood products from Hai Duong.

“The fish got in the car and it was blocked, only the water poured out. Other goods have a turnstile, fish don’t,” he said. According to him, types of fish in cage such as red and rice flakes are only expected to be consumed outside the province because this is an expensive commodity, which is a specialty.

Mr. Ta Van Hung, Director of Thang Long Fishery Cooperative (Kinh Mon, Hai Duong) shared “no one is sad to catch fish because the car is not popular, can not sell to anyone”. According to him, people are now accepting losses to raise fish. How much loss depends on the number of days the goods are in stock because the cost of livestock can not be reduced, even the raw materials are increasing because the transportation of goods is not convenient.

Having a little more luck, Mr. Nguyen Manh Hung, Director of Kien Giang Agricultural Seed Export Joint Stock Company in Cam Giang, said he is still reminding even though his travel is limited. “My business supplies to the northern supermarket system, temporarily fine, although the testing time and transport procedures are still a little messy,” he said.

He further shared, the amount of vegetables and fruits in the area still remains quite a lot, the price is still 1/3 lower than before. The preservation is also not easy, it is necessary to communicate soon because people can not stand it in the warehouse sooner or later.

Although business is difficult, farmers and businesses still accept it because they think this is a common problem of the society. Many people also agree with the tightening of neighboring localities because only when the translation is under control, the business will be calm again.

“I think Hai Phong has done it thoroughly so there is also a good point. Covid runs out quickly so people can live normally again,” said Mr. Hung.