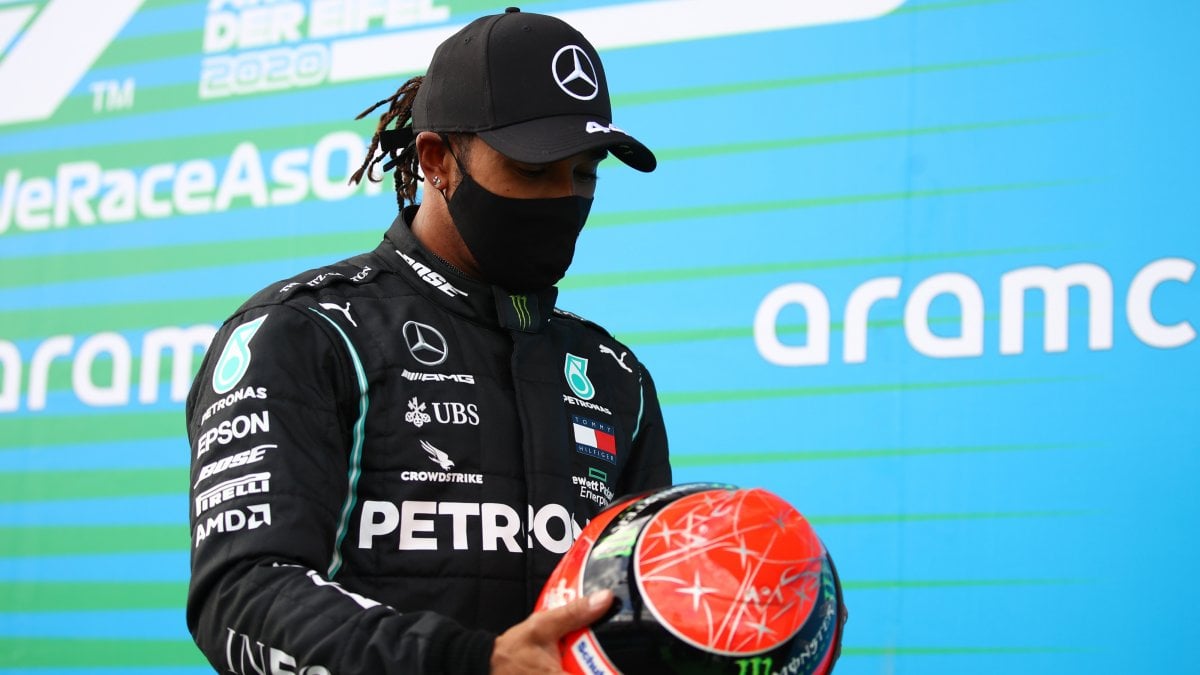 Lewis Hamilton as Michael Schumacher: 91 successes. The six-time world champion equals the F1 legend and does so in Germany, on the Nurburgring, where the German was also the most successful (5 wins). The Briton with his Mercedes rewrites history before the eyes of the Kaiser’s son, Mick, 21, who follows the race from the Alfa Romeo pits with which he should have made his debut at the wheel in Friday’s free practice, then canceled due to rain and fog, and then he goes to hand him his father’s helmet saying: “Congratulations, it’s a great achievement”.

Lewis takes Schumacher’s helmet to the podium. It was only a matter of time since he took his first win in Canada (with McLaren) in 2007. And Hamilton has seized the perfect moment: after missing the pole for a while finding himself behind his teammate, Valtteri Bottas, he redeems himself in the race by attacking the Finn immediately, then passing him at the right moment, finally taking advantage of an error by his squire which will then be forced to retire due to a problem with the (new) engine hybrid. “I had a good start, I joined Valtteri, I had a bit of understeer, I held tight, I tried to manage the tires for a few laps before attacking, while Max was going very fast. I’m in seventh heaven. Thrilled to receive Michael’s helmet, I don’t know what to say, I grew up idolizing Michael, I played “Michael” in video games, I looked at his domain and never imagined that I would get close to his records and I only realized it by entering the pita lane. It’s a great honor. “

Hamilton equals Schumacher’s record, Mick hands him a helmet from his father

In the icy forest of the Eifel, 9 degrees in the air and 18 on the asphalt, the race itself, net of Bottas’ surprise retirement that puts doubts on the reliability of the Mercedes engines (which are new for both drivers) safety car 15 laps from the end that does not mess the grid too much, does not offer great emotions. On the podium, 2nd, is Max Verstappen with his Red Bull who also does the fastest lap: “Good race, I tried to follow Lewis and once Valtteri went out I was attacked, but Lewis was too fast. The track was very cold and the tires become cold once we get out of the pits. We’re second and it’s the place we deserve today.

It is the third place that makes smiles uncorked, with Daniel Ricciardo and the Renault 3rd, on the podium he did not rise from the success in Monaco in 2018: the Australian will now force team principal Cyril Abiteboul to get a tattoo: “It’s been a long time time since my last podium, it seems to me that this is my first time on the podium, I’m happy, now we’ll see what I will do to Cyril, maybe a tattoo about me and Germany “.

Ferrari, after Charles Leclerc’s excellent 4th place in qualifying, proves to be the Ferrari of this season in the race: slow. Fortunately, the safety car in the final saved them from dubbing. The Monegasque closes 7th: “We have often seen since the beginning of the year in qualifying that with little fuel we manage to extract the maximum, but then in the race it is a disaster, especially with the soft ones that are ruined immediately. given the effort I made at the beginning. This is what we could do today “. Sebastian Vettel, 11th at the start, is also 11th below the finish line after a race where he also spun while battling Giovinazzi’s Alfa: “The start was not bad, then we took too many risks, it’s it was difficult to recover. With the safety car there was a chance to score points but I didn’t make it. The attempt to overtake Giovinazzi? . Did the updates help? I don’t think it was what we expected. “