Experts: Dat Dong Anh, Me Linh, Soc Son do not have fever because of planning news 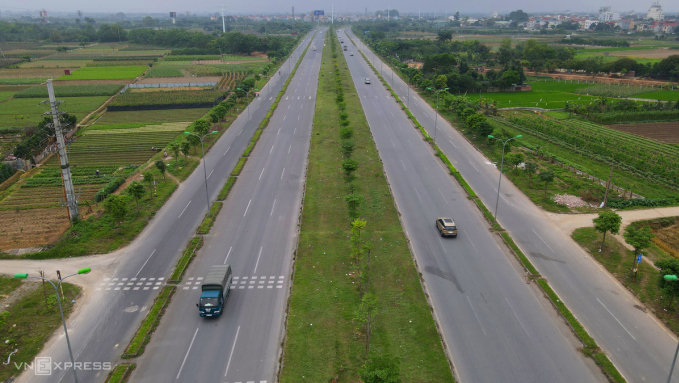 Experts estimate that the land of Dong Anh, Me Linh, Soc Son “has warmed up but not hot”, investors need to be cautious before putting money down.

Ms. Nga, an investor, said that many friends shared that they were “boiling” with Dong Anh land because they heard that this place was being planned for the city. “Compared to the quarantine period, the Son Du and Nguyen Khe areas in Dong Anh have grown strongly,” she said.

Another investor named Nam said that members of the chat group on Zalo and Facebook this time discussed quite enthusiastically about the “city within city” planning story of Hanoi. “There are a few brothers and sisters who are too excited to invite each other to see the sandy soil despite the cold and rainy weather. But also many people are hesitant about being blown up,” he said.

Some real estate brokers said that Dong Anh’s land has so far been priced high, even some positions are advertised on par with land in the inner city. After the recent peak of land fever epidemic, land prices have decreased but now have started to show signs of increasing again.

Meanwhile, experts say that the real estate market in Dong Anh, Me Linh… is warming up, but shows that the market is recovering, not hot and sudden like the beginning of the year.

Mr. Nguyen Quoc Anh, deputy general director of Batdongsan site, citing big data on this online real estate site, said that investor interest has recovered by 50-70% compared to August, when it was viewed. is the bottom zone. As for Dong Anh, Me Linh and Soc Son areas, one week after the news that these places can be planned to the city, the investor’s interest level is 50%, 60% and 75 percent, respectively. % compared to March – the period when the whole country was feverish.

Sharing the same opinion, Mr. Vu Truong Thang, General Director of Winhousing Vietnam Joint Stock Company, also said that this area was interested by investors before there was information about the “city within city” planning.

For example, many investors are interested in large land plots in Me Linh, Soc Son for long-term investment and resort. The demand for this type of real estate has arisen more when Covid-19 hit. Some other investors are interested in real estate subdivision for sale because these places have many industrial parks and FDI enterprises with tens of thousands of workers…

However, According to experts, the price level of these markets does not have many big fluctuations.

As with land in Me Linh district, the current market asking price is much higher than the district’s auction price, which ranges from 9–16 million VND per square meter depending on the location. Sharing in the press nearly a week after the planning information, the Me Linh District Land Fund Development Center said that recent land transactions in the area are mainly auctions, with very few transfer records. Accordingly, the price fever is not realistic, and it is not excluded that there are subjects who take advantage of planning information to “blow up prices”.

Mr. Quoc Anh also said: “The price level is going sideways, not much increase, if any, it will only fluctuate 10-20 million dong”.

According to experts, cash flow will continue to pour into real estate when interest rates are expected to decrease because more money is pumped into the economy and some business areas are afraid of the epidemic, so they have not yet invested heavily again. . Pouring capital into places with planning potential such as Dong Anh, Me Linh, Soc Son can therefore be an option for investors.

However, Mr. Thang noted, investors who want to buy at this time, need to determine that this is a long-term investment and does not use too much financial leverage to benefit in the future. The reason these areas have in common is that they are waiting for planning, large projects to be implemented, and the transport infrastructure connecting the inner city is still incomplete. Currently, there are only Thang Long and Nhat Tan bridges connecting Dong Anh and Me Linh to the center of Hanoi.

Besides, the market is also unlikely to have a fever to help many investors have the opportunity to surf like before. “In a high-risk market, customers will consider carefully and often the products that have been legalized and handed over will receive a lot of attention from investors,” Thang said.

Mr. Quoc Anh also added that many investors in the first quarter have not yet sold out, so they will carefully consider the price. “They will be careful to assess whether such a high price is the real price or just a way of price creation by brokers and land dealers,” he said.

And Mr. Su Ngoc Khuong, Senior Director of Savills Vietnam, gave 3 advices to investors. The first is to determine the time when profits return fastest. Next is liquidity. “It’s okay to buy and sell at a small profit, but it must be sold and transferred,” he said.

Investors also need to be careful using financial leverage, avoiding creating burdens for themselves. Finally, he emphasized that the legality, planning, ie if it is not clear whether the planning information is real or not, how should be careful.