Excavated at a special temple with 13 crowned Nguyen kings: Many unexpected revelations 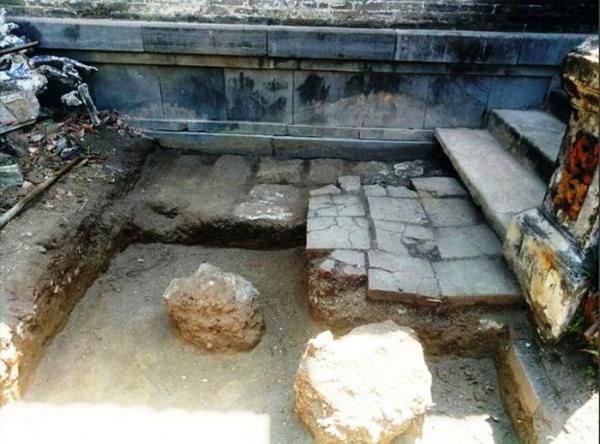 Many ancient structures and materials have appeared at archaeological sites of Thai Hoa Palace, Hue Imperial Citadel – the place of coronation and throne of 13 kings of the Nguyen Dynasty.

Archaeological excavation work at Thai Hoa Palace began on June 5 and lasted until June 20, covering an area of ​​66m2 in the East and West wings of the temple. This work was chaired by Ms. Le Thi An Hoa, Head of Scientific Research Department of Hue CRC Center.

By June 10, the initial archaeological work had obtained remarkable results. The base of the foundation appeared in the west wing of the northwest corner of Thai Hoa Palace. Photo: Hue CSC

Mr. Vo Le Nhat – Director of the Center for Conservation of Natural Resources and Environment of Hue, said that this archaeological session is of great significance for the research and supplementation of the project file “Conservation and overall restoration of Thai Hoa palace monuments”. “. Exposed laterite, which is closely tied to the foot of the East gable, steps up and down Thai Hoa Palace. Photo: Hue CSC

Previously, as reported, the Ministry of Culture, Sports and Tourism has just issued Decision No. 1743/QD-BVHTTDL agreeing to allow archaeological excavations at the site of Thai Hoa Palace – Hue Imperial Citadel to consolidate records. contribute to complete the plan of conservation and overall restoration of this relic.

At the request of the Ministry of Culture, Sports and Tourism, during archaeological excavations, Hue Center for Conservation of Natural Resources and Environment paid attention to protecting the stratigraphy of the monument; propagate to the people about the protection of cultural heritage in the locality; do not publish official conclusions without the agreement of the governing body and the Department of Cultural Heritage. Revealing a laterite system of curbstone close to the foundation of the West gable. Photo: Hue CSC

Artifacts collected during excavation must be temporarily kept at the Museum of Royal Antiquities in Hue to preserve and avoid damage or loss of artifacts. The Center is responsible for reporting to the Minister of Culture, Sports and Tourism on plans to protect and promote the value of those artifacts…

Previously, in January 2020, Hue Center for Conservation of Natural Resources and Environment held a consultation with experts and researchers on the plan to restore and preserve Thai Hoa Palace, after this special work was hit by a storm. severely damaged in October 2020. The restoration and restoration of Thai Hoa Palace will keep the original status quo of the work.

According to historical and scientific documents, Thai Hoa Palace is the most important architectural work in the Nguyen Dynasty Royal Palace. This is the place where great ceremonies and dynastic meetings take place with the participation of the king, prince, country and other ministers.

Construction began in February 1805 and completed in October 1805.

After being restored many times, due to time factors and serious effects of weather, especially the heavy rainstorm at the end of 2020, the special relic Thai Hoa Palace is seriously degraded. Therefore, the investment in restoration and embellishment of the work is very urgent.

Excavated at a special temple with 13 crowned Nguyen kings: Many unexpected revelations