Enjoy the process of forming a giant planet in the universe 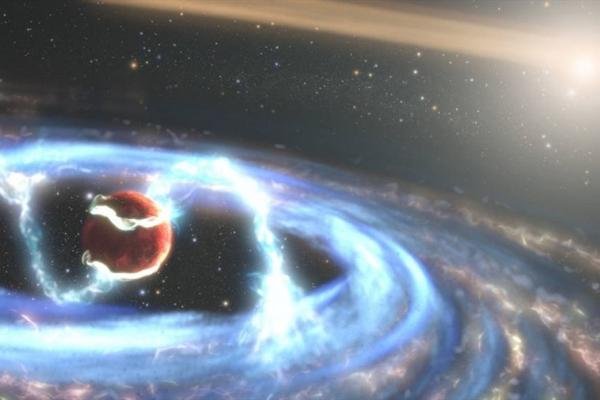 Opening a new way of deep research into exoplanets

Although more than 4,000 exoplanets (exoplanets) have been cataloged, only 15 have been captured directly with telescopes. And the planets are so far away and small that they are just tiny dots in the best pictures.

However, the team’s new technique using the Hubble telescope to obtain a direct image of the planet opens up new avenues for further study of the exoplanet, especially during the image years. city ​​of that planet.

“We don’t know much about how giant planets evolve. This planetary system gives us the first chance to see matter merge into a planet. Our results open up a new field for this research “- NASA quoted researcher Brendan Bowler of the University of Texas in Austin, USA.

The European Southern Observatory’s very large telescope captured a clear image of the planet forming PDS 70b, around a dwarf in 2018. Photo: ESO.

The giant exoplanet observed is PDS 70b, orbiting the golden dwarf PDS 70. Astronomers already know that two planets are actively forming inside a giant disk of dust and gas surrounding PDS. 70. This system is located 370 light-years from Earth in the constellation Centaurus (Centaurus).

“This system is very interesting because we can observe the formation of a planet. This is the youngest true planet that Hubble has ever photographed directly, “said researcher Yifan Zhou, also at the University of Texas in Austin. At the age of 5 million years, the planet is considered young and still are collecting matter to form blocks.

The Hubble telescope’s UV sensitivity offers a unique view of radiation from the extremely hot gas falling onto the planet. “Hubble’s observations allow us to estimate the planet’s mass increase rate,” said Zhou.

Researchers Zhou and Bowler emphasized that more data is needed to determine whether the planetary speed with addition of matter increases or decreases. “Our measurements show that the planet is in the final stage of its formation,” noted the two researchers.

Understand the planets that form around the sun

The PDS 70 system is fed by a disk of pristine gas and dust that fuel the planets’ growth throughout the system. Planet PDS 70b is surrounded by its own dust and gas disk. This disk is sucking matter from the much larger stellar disc. The researchers hypothesize that magnetic field lines extend from the planet’s ring disc down into the exoplanet’s atmosphere and bring matter to the planet’s surface. The planetary position PDS 70b by observations through the Hubble telescope. Photo: NASA.

“If this matter follows columns from the disk to the planet, it will cause local hot spots. These hot spots can be at least 10 times warmer than the planet’s temperature, “said expert Zhou, who glows violently under UV rays.

These observations provide insight into how gas giants formed around the sun 4.6 billion years ago. Jupiter may have formed and grew on an enclosed disc with moving matter. The planet’s main moons will also be formed from excess material in this disk.

The challenge for the team is to overcome the bright light of the parent star. PDS 70b orbits at roughly the same distance as Uranus from the sun, but its star is 3,000 times brighter than the planet at UV wavelengths. When Zhou processed the image, he carefully removed the star’s glare in order to leave only the light emitted by the planet.

The research results were published in April 2121 in the Astronomical Journal.

Enjoy the process of forming a giant planet in the universe