Drinking 10 cups of wine at the death anniversary, young male comatose because of alcohol poisoning 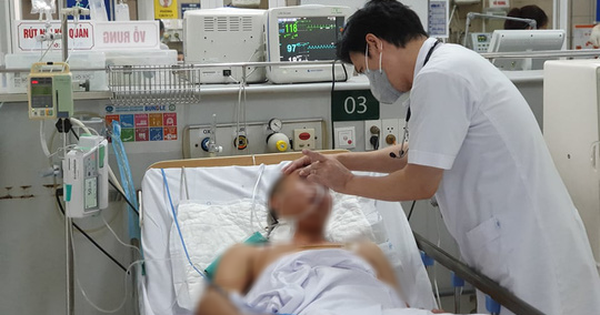 According to Dr. Nguyen Tien Dung, the hospital’s Poison Control Center, among 3 patients taken to the emergency room at the Center, there is 1 male patient, NDH (31 years old, in Bac Ninh) in a critical condition, deep lethargy, cyanosis, drop in blood pressure, signs of brain damage … The patient was diagnosed with methanol poisoning.

A patient with methanol poisoning is being treated. – Photo: M. Thanh

According to family members, on October 11, Mr. H. attended a family anniversary in Bac Ninh and drank about 10 cups of wine. After one day of drinking, the patient developed fatigue, nausea, and vomiting a lot. In the evening of October 12, the patient was taken by family members to the district medical center and transferred to the Poison Control Center, Bach Mai Hospital at night.

Patient H. was hospitalized in a deep coma, showing signs of brain edema, blood pressure drop, dilated pupils, cyanosis. The test showed that severe metabolic acidosis, methanol concentration in blood was 79 mg / dL. The patient is given dialysis, using antidote, emergency resuscitation …. After 2 days of intensive treatment, the patient passed the critical crisis, regained consciousness, breathed on his own and is slowly recovering.

One case alcohol poisoning Another is a TVS patient (34 years old, in Bac Giang). Patient was hospitalized on October 13 because of blurred vision, accompanied by general pain, nausea. Two days from the hospital, the patient attended a death anniversary in Bac Ninh and took about 300 ml (with NDH patient). Blood test results showed that the patient also suffered from alcohol poisoning containing industrial methanol alcohol.

On October 14, the Poison Control Center continued to have a third patient diagnosed with industrial methanol alcohol poisoning after drinking alcohol at the death anniversary above.

The alcohol samples the patients drank were brought to the Poison Control Center, the alcohol sample test results at the Poison Control Center showed that this alcohol contains up to 26.16 degrees as industrial alcohol methanol, while alcohol content. Normally the composition of ethanol is only 5 to 6 degrees. Alcohol poisoning patients reported that this wine was bought by their families on the internet and that at the death anniversary more than 20 people had been drinking it together.

Doctor Nguyen Trung Nguyen, Director of the Poison Control Center, Bach Mai Hospital, said that in addition to these 3 patients, there may be more cases of alcohol poisoning in this death anniversary but have not been discovered. If industrial methanol alcohol poisoning is not detected early and treated in time, it is very easy to cause brain damage, severe death, long-term coma sequelae, and permanent blindness.