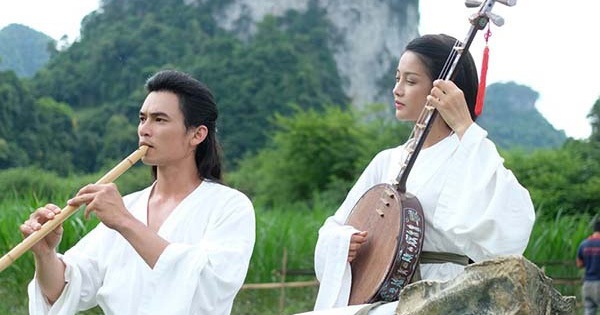 Kieu and Thuc Sinh in the movie “Kieu”

Movie Kieu (Director Mai Thu Huyen, screenwriter Phi Tien Son) has a lot of crying scenes. However, those tears did not have a tragic figure.

Rough, clumsy, shy, not at all

Cry a lot, but barely introverted, which is a paradox of many Vietnamese films. It is the same with Kieu.

Faced with the reflection of tragedy, the way to treat “a hundred movies as one” is for the actor to cry a lot, struggle, and fall short, ending with a scream processed into a resounding sound. That is the old expression of Vietnamese films in general and Kieu in particular.

In the cast of characters, only Hoạn Thu is described internal developments. From a wife languishing in waiting for her husband, not being cared for by her husband, Hoạn Thu discovered and witnessed her husband fall in love with another woman.

The character is both jealous, hatred, and yearning for love and caresses from her husband. However, the expression is too rough and clumsy. The episode of Hoạn Thu, both making love with Thuc Sinh and revenge on Kieu, was staged cumbersomely, living awkwardly in both sound, image and intentions.

Kieu is weak and old, Dam Tien’s ghost is catastrophic

With the stature of the original, Kieu is a character not only famous in literature but also a symbol in society, overcoming the changes of times and still an immortal image. With integrity, Kieu also has a generous heart when sympathizing with the painful fate of “halfway through the spring” under Dam Tien’s lonely grave.

But this Kieu does not. This may be one of the worst versions of Kiều on stage and in Vietnamese films. Kieu’s role in the film has been stripped of two things: her style and acting. As Kieu, Trinh My Duyen is beautiful but immature, weak acting. Kieu’s acting land and introspective are too little to make a mark.

The film spends a lot of time on the suffering of Hoan Thu and another strange character – Dam Tien, played by Mai Thu Huyen himself. Dam Tien’s ghost is the film’s most risky change Kieu but also a huge failure. In terms of shaping, character and action, the character loses the meaning of Dam Tien in the original.

Dam Tien in the movie is like a supernatural force that can use magic to knock, blow, attack people … This is Dam Tien hating men, forbidding Kieu from falling in love with Thuc Sinh, placing knives in Kieu’s hands. incite revenge. The sympathy between the two people is only shown through a few half-hearted words, the promise of protection and an inaudible argument because of the sound effects.

In the original work, the communion was great when Dam Tien gave Kieu a dream about her fate. Dam Tien is like a companion, is spiritual (talking about past lives, karma, repaying karma), advising and encouraging Kieu and then prophesying her “a blissful fate” and will step over.

Do not commemorate Nguyen Du by bad product

True to the concern of many viewers when watching the trailer, the film turns “new cry of intestinal pain” into a love story full of old “drama”. The film is like a stretched version of the stretched trailer: rough, clumsy, weak acting and without a hint of classic style, messy details, a fuzzy story, a joke as a joke.

The hot scenes mostly take place outdoors to take advantage of the greenery, but show the flesh, taking place too long.

The filmmaker said that the status and mood of the women in Nguyen Du’s work – not only Kieu but also Hoạn Thu and Đàm Tiên – should be respected and portrayed. But it seems that this is just rhetoric, when the movie can’t do it.

And with Thuc Sinh, Kieu created a Thuc Sinh, a combination of both Kim Trong, Thuc Sinh and Tu Hai in the original story while drawing, reading poetry, selling silk, and being very good at martial arts.

Thought that a man who meets all these elements must be perfect and strong, but as in the story, Thuc Sinh is very weak, weak, cowardly, only able to fall in love with Kieu, hide the wife who lives with Kieu even knows that it is only a brief happiness, allowing her to turn herself into a tool of revenge.

Kieu just like an illustration as stiff as the picture of Kiều in the movie. The cast of supporting characters (Phuong Thanh, Le Khanh, Hieu Hien …) and the masses are again shown with a corny personality, superficial acting.

Writer Phi Tien Son’s Kieu said: “The most important question of Kieu story is a question of human rights. That question transcends love, transcends all. How to free Kieu? How can Kieu express her desire to be free, to love, and to be a human being?

Thuc Sinh, Thuy Kieu, Hoan Thu – all three of these people have a desire for freedom, all aspire to the right to be human. Don’t think this is a normal love triangle.

There is a common thought that the poem “All in all, the great poet Nguyen Du is to have mercy on her in the future / Thien Ha Nhan Khap To Nhu”.

But the poet Nguyen Si Dai once analyzed, an author who is intelligent and understands “the kinds of beings” like Nguyen Du can not just expect people to cry.

Rather, he hopes the posterity will understand him, sympathize with him, and cry and grieve together for the fate of “the word of fortune is good to hate each other”.

As he “cried” for Kieu, for Dam Tien, for Tieu Thanh in the poem Poison Tieu Thanh signed above. Nhu Kieu cried for Dam Tien. Nguyen Du’s work converges heart and soul through generations and many fates.