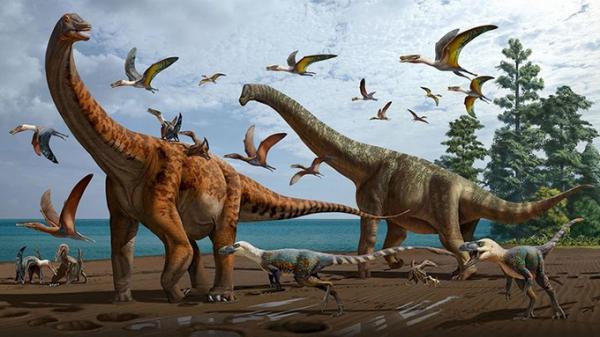 In the journal report Scientific Reportss on August 12, a research team from the Chinese Academy of Sciences and the Brazilian National Museum named two new species, Silutitan sinensis and Hamititan xinjiangensis. Both combine “titan” in Greek, meaning giant, in reference to their size.

The Silutitan specimen is estimated to be up to 21 m long, while the Hamititan is more than 17 m long. For comparison, they are almost as long as the largest animal on the planet ever, the blue whale: between 23 and 30 meters long depending on the hemisphere in which they live.

Fossils of two giant creatures were unearthed in the Xinjiang Autonomous Region and the Turpan-Hami Basin in northwest China. They date from about 120 to 130 million years ago, in the Cretaceous period.

Both Silutitan and Hamititan belong to the group of sauropods (Sauropoda) – which includes the largest animals ever to walk on land. They eat plants and have a characteristic long neck.

In addition to the two new species, the team unearthed several other bone fragments of a previously described species of Sauropoda from the Somphospondyli group, which lived from the late Jurassic to the Cretaceous period.

“These findings not only provide additional information about the sauropods, but also increase the diversity of ancient fauna in China,” the team said in the report.