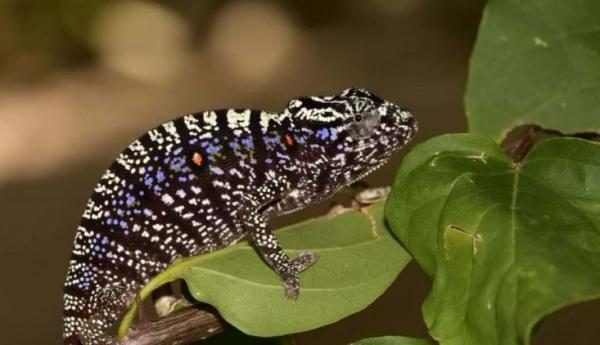 Biologists discovered a species of chameleon thought to be extinct 100 years ago on the island of Madagascar.

The Global Wildlife Conservation (GWC) announced the discovery on October 30 in an article in the journal Salamandra. Accordingly, the Voeltzkow chameleon was discovered during an expedition in 2018, but so far it has only been announced.

This species was last seen in 1913, before World War I. After more than a century, seemingly extinct, this colorful creature with the ability to change color suddenly appeared on Madagascar. In a project to find “lost” animals by GWC, biologists found more than a dozen healthy Voeltzkow chameleon individuals, including males and females.

According to scientists from the Bavarian Collection of Zoology (ZSM), genetic analysis has determined that the species is closely related to the Labord chameleon. The team claims that both species live only during the rainy season, hatch from eggs, grow rapidly, compete with rivals for mating and then die for a few short months.

Frank Glaw, lead researcher and explorer at the Zoologische Staatssammlung Chnchen Museum of Natural History in Germany, said: “I thought we might find the Voeltzkow chameleon again but didn’t expect it to take much. so long. Their remote habitat and short lifespan have kept them hidden for decades.

While the male Voeltzkow chameleon has a predominantly light green color, females are much more showy with red, blue, green, purple, orange, black and white patterns on the body. “Females can change color depending on their mood,” GWC says. The number of red dots on the children’s flanks also varies from individual to individual.

The team has also released a video about the rare wild gecko. The footage includes footage of a chameleon eating an insect with examples of how the female changes colors.

“The Voeltzkow chameleon adds color and beauty to the planet, and at the same time reminds us that even when all seems to be gone, a wonderful adventure can rekindle hope in species. that we have not seen since Woodrow Wilson became president ”, Don Church, President of GWC emphasized the significance of the new discovery.

The chameleon Voeltzkow is on the GWC’s list of the most wanted lost species. Earlier this year, the organization also announced the rediscovery of the rare Somali sengi elephant shrew after more than 50 years disappearing in Africa.