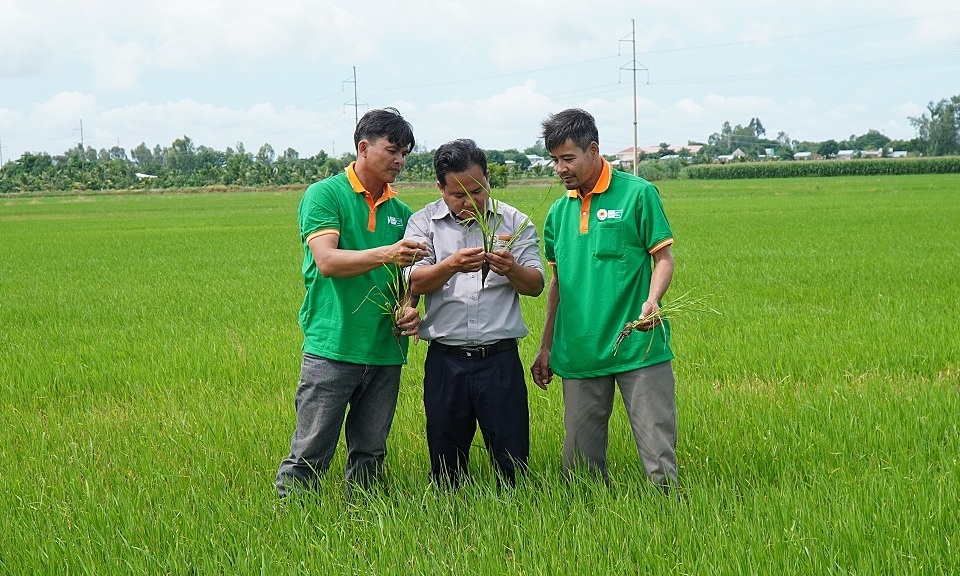 Pressure from rising prices of agricultural materials and declining purchasing power made rice businesses lower their profit targets this year.

Before the annual meeting, Trung An Hi-tech Agriculture Joint Stock Company (TAR) adjusted its profit after tax to decrease by nearly 6 times compared to the plan set out at the beginning of the year. Previously, TAR’s target of recording 600 billion dong of after-tax profit was considered a record breakthrough.

An Giang Import-Export Joint Stock Company (Angimex – AGM) is also expected to adjust its business plan in an extraordinary meeting at the end of this month. Specifically, consolidated revenue will decrease by more than half, profit before tax will decrease by more than two-thirds compared to the figure approved at the previous annual meeting. Thus, this business anticipates the scenario where the profit is only less than half of that of last year.

Previously, Loc Troi Group Joint Stock Company announced a plan to reduce profits by 4% compared to the previous year. This business only targets a profit of 400 billion dong. This number is also kept the same for the whole year of 2023.

Rice enterprises delayed their profit plan in the context of burden from production input to product output.

The Ministry of Agriculture and Rural Development has repeatedly stated that along with animal feed, the high price of fertilizer has put great pressure on farmers and businesses.

Vietnam Seed Corporation (Vinaseed – NSC) also said that this year there will be many difficulties and risks affecting the implementation of the business plan. One of the biggest risks is the weather factor. Right at the beginning of the year, the weather had unusual and irregular changes such as the early rain in the Mekong River Delta in the period of rice ripening, affecting the purchase output. As for the area of ​​Binh Dinh – Quang Nam with historical floods, the Central Highlands – Quang Nam has cold weather in April, the period when the rice is blooming…

This enterprise also noted the increase in investment costs for production due to the increase in the price of materials and fertilizers by 30-40%, and even double the price of many items. Loc Troi also said that the price of raw materials and products for crops increased by 30% due to supply chain disruptions last year. Not to mention, the agricultural industry is facing pressure from land-use restructuring and a shortage of human resources due to urbanization and industrialization…

In output consumption, the rice industry is being greatly affected by high transportation costs. Many businesses are strong in exporting, but this channel is not necessarily full of sweets. Angimex leaders said that rice exports to the Asian market have low profit margins, high risks, and a sharp increase in logistics costs.

As for transportation costs, Trung An Company once said that this was one of the reasons why this business did not complete its business plan in the previous year. Specifically, freight rates in Asia more than doubled, freight rates to Europe also increased three times last year.

The domestic channel also faces a similar pincer position. Mr. Du Phuc Thinh – Modern sales channel manager of Hoa Sen Rice Co., Ltd. (Lotus Rice), said that the market purchasing power has decreased by 15-20% compared to the same period in 2021. The reason comes from consumers. There is no longer the mentality of hoarding essentials like the time of social distancing.

“The price of gasoline, transportation, input materials has increased unprecedentedly and has not tended to decrease … also pushing businesses into a position of being forced to adjust their output prices while the market purchasing power is low.” he explained further.

From the beginning of the year until now, this enterprise specializing in organic rice production has had to continuously balance profit targets to ensure expenses during operation.

However, a representative of Lotus Rice noted that the specificity of the rice industry is that purchasing power will gradually increase in the second half of the year due to charity or Tet holiday and the expansion of new distribution channels at supermarkets, convenience stores, and online. …

In the export segment, preliminary data from the Ministry of Industry and Trade shows that, accumulated in the first 5 months of the year, Vietnam exported about 2.86 million tons of rice, equivalent to 1.39 billion USD. Over the past time, the price of Vietnamese rice has decreased, but it has always remained at a level higher than that of other countries by 3-16%.

The Vietnam Food Association previously predicted that this year’s rice exports will reach about 6-6.2 million tons. The middle of the year is the time when the world market will boost purchases and many businesses have also closed export orders of up to thousands of tons.