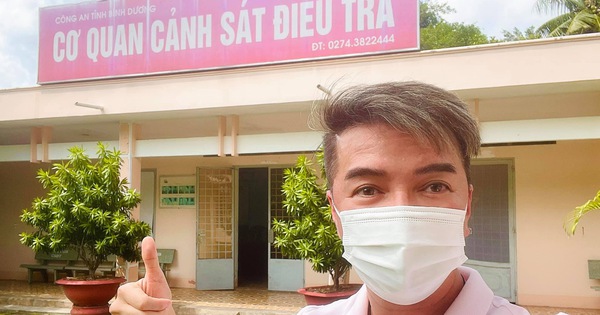 On the afternoon of October 13, on the fanpage, Dam Vinh Hung informed about the process of working with the authorities around the recent denunciations.

Dam Vinh Hung said: “Currently, I have had a meeting with the Investigative Police Agency of the Ministry of Public Security (C02) and have provided documents at the request of the investigator.

Regarding the meeting with the Criminal Police Department of the Ministry of Public Security (C02), Dam Vinh Hung did not specify the content. However, before that, the press had information that C02 was investigating the origin of charity money of Dam Vinh Hung after receiving a denunciation from Ms. Nguyen Phuong Hang. The complaint alleges that this amount of money is of unknown origin, has signs of illegal appropriation, has not released documents…

After posting a photo of himself at the police headquarters of Binh Duong province, Dam Vinh Hung expressed an optimistic attitude: “The working sessions are held very objectively and in accordance with the law. The good thing is that everything is gradually unraveling. , the investigation agency also clearly exchanged views that will work impartially and vigorously to investigate to get results soon.”

The artist also expressed his belief that when the investigative agency gets involved, the matter will be cleared up. “Whoever wrong, slanders, fabricates information about me must be responsible for his actions, by law and if I am wrong, I will also be responsible before the law,” he stated.

This application is forwarded to the Investigation Police Department of Binh Duong Provincial Police for settlement according to its competence. On October 13, the press reported that Ms. Nguyen Phuong Hang’s application accusing Dam Vinh Hung of being unclear about the origin of charity money was transferred by the Ho Chi Minh City Police to the Criminal Police Department of the Ministry of Public Security (C02) to clarify.