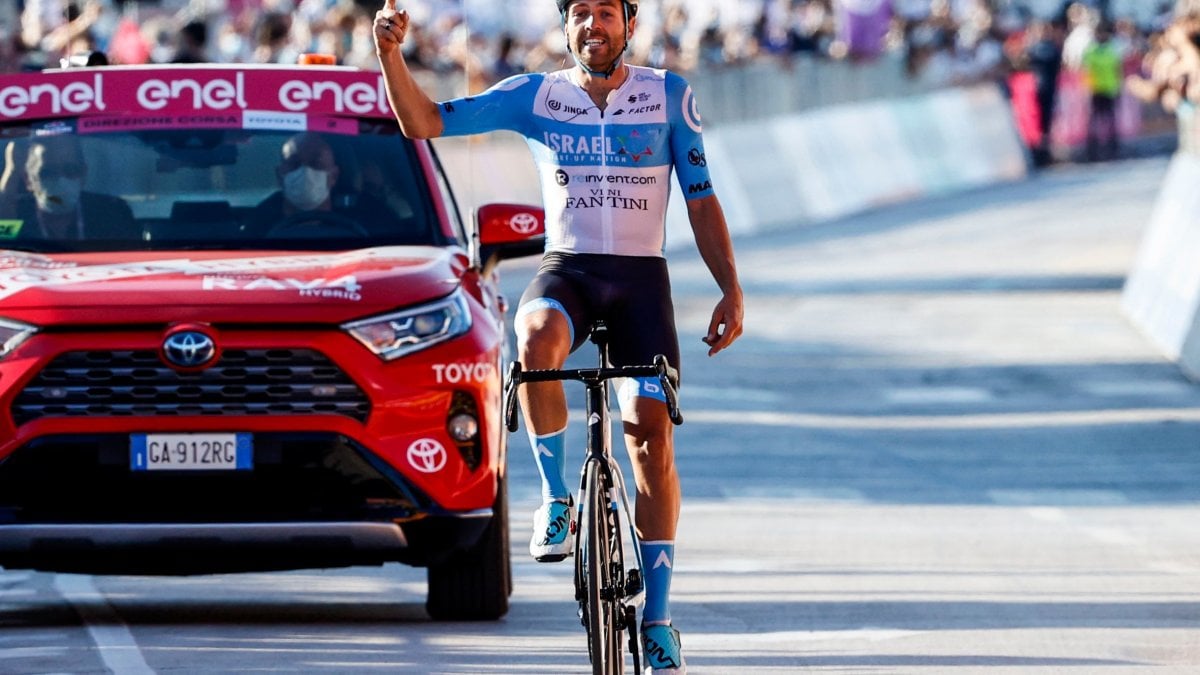 It is not Alex Dowsett’s first time at the Giro, but it is the first time for an Israeli team in cycling that matters. It took the Israel Start-Up Nation 5 years to win a stage in a big lap. Mission accomplished in Vieste thanks to a British man with a particular history: a symbolic athlete, capable of combining sport at the highest level with a haemophilia that has always been going on for him. An already rich palmares, made up of many time trials (including one at the Giro d’Italia seven years ago) and three months of glory for the hour record, before Rohan Dennis took it off, in turn ousted by Victor Campenaerts. Dowsett only needed to enjoy the taste of victory, accustomed as he was to rushing to the finish line in time trials without realizing what revolved around him. This time, however, it was different: the last 100 meters were almost made at a walking pace in a sort of self-celebration of the triumph. “I don’t know what to say. I’ve had my satisfaction in the time trials, but you can’t understand what all this means in this difficult year,” he explained. “I can’t believe it, I’ll become a father in January but I can’t look so far ahead.”

Nothing changes in the general classification: Almeida remains in the squad on the eve of the first graduation exam of his career, Sunday on the Roccaraso climb. Instead, the general tranquility in the group changes: Simon Yates’ positivity at Covid obviously casts shadows on the future of this Giro, called more than ever to live for the day. “It is the first case after ten days, we are calm because it means that the bubble held up. And the issue of rapid checks has its own value, it allowed us to stop Simon quickly. If we had to use the Uci protocol, we this morning we should have sent the tests to Milan and waited for an answer. So we were able to block the situation and secure the bubble and the group “, explains the director of the Giro d’Italia Mauro Vegni.

And who knows, perhaps due to an unconscious emotional reaction to the situation, more likely to save energy for Sunday, the group lets the escape go without placing any conditions. The second hypothesis is confirmed by the pink jersey: “We spent seven days at full throttle, today was an easy day with the group and I must say it was positive. I enjoyed the view, especially in the downhill section. I love this guy of landscapes “.

Six runners on the run. There is Salvatore Puccio, in the past even a day in the pink jersey: he is another of Team Ineos who after Thomas surrendered has carte blanche. With him Ravanelli (Androni Giocattoli-Sidermec), Rosskopf (CCC Team), Holmes and the Israel Start duo formed by Dowsett and Brandle. They take such a large margin (in the end the margin will be almost 14 minutes) that they can handle the situation as a private business. Apart from two GPMs along the route, there is a final circuit that presents an insidious tear. Puccio is the one who makes the big voice, Holmes and Rosskopf stick to him. It is the first moment in which the numerical superiority of Dowsett and Brandle begins to be felt: they return, then when the Briton starts the Swiss is perfect in the tactical game ‘disturbing’ the changes.