Watch Video: People in the outskirts of Saigon tell a story of being climbed by crocodiles on a boat in panic

The crocodile crawled into Mr. Thanh’s livestock garden and was arrested on April 11

Crocodiles come into the garden, crawl on boats …

On April 27, we went to Canal 5 (Hamlet 4, Pham Van Hai Commune) to meet Mr. Duong Van Thanh (41 years old), who “encountered” with a “giant” crocodile right in the irrigation ditch in the land rented by the family. to cultivate.

Mr. Thanh said that on the afternoon of April 11, while going to check around the 2-hectare garden, he heard strange noises. Approaching, where the sound was made, Mr. Thanh panicked to find a large crocodile lying on the bank, close to the edge of the water canal. “At that time I was very scared, the crocodile more than 2 meters long was stalking to attack my goats” – Mr. Thanh said.

Detecting people, crocodiles move down the ditch. Due to the times when the garden lost chickens and ducks suspected by crocodile attacks and eating meat, Mr. Thanh decided to catch this crocodile. The crocodile was then electrocuted and pulled up from the ditch by Mr. Thanh and the people around him. “The crocodile weighs 89 kg”, Mr. Thanh said. Crocodile meat was split for the people, only crocodile skin Mr. Thanh kept hanging in the garden

Knowing that Mr. Thanh caught a “giant” crocodile, people came to see it. Many people are worried because the terrain of this area is the same, most of the houses are close to the canals and canals.

“We also have children in our house, so I’m scared. When the kids go to school, we will help, but at home we have to take care of it. For several days, she reminded the children not to play near the water’s edge, afraid that there were still deep fish ”, Ms. Nguyen Thi Tuyet (56 years old) near Mr. Thanh’s house was worried.

Mr. Tong said that at that time, he and Truc and one of his younger brothers rowing a boat to catch fish near Canal 5 (Hamlet 7, Pham Van Hai Commune), the road leading to An Ha cemetery. 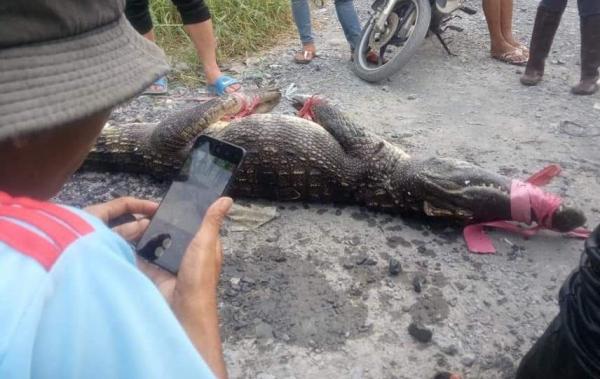 A crocodile weighing more than 70 kg was captured by Tong’s group on 8.4

At this time, the group divided into two directions to catch fish. In it, Tong’s brother got a bad fish climbing on the boat, so scared he climbed a tree. Receive the news, Mr. Tong and Truc ran through the support to catch a crocodile weighing more than 70kg and brought it ashore.

According to Tong, a few days after catching fish in this area, he continued to discover crocodiles.

Mr. Nguyen Tan Son (61 years old, living in Kenh 5, Pham Van Hai commune, H. Binh Chanh) said that his garden has also been crawled many times in the garden. Especially on flooded days, chickens, ducks, roaming around the garden are also eaten by crocodiles. In such times, Mr. Son just used a tree to scare away the crocodile and let him swim away.

Crocodile appearance in the area, according to the people, the commune has households that used to raise commercial crocodiles, it is likely that the crocodile escapes to live in the natural environment. 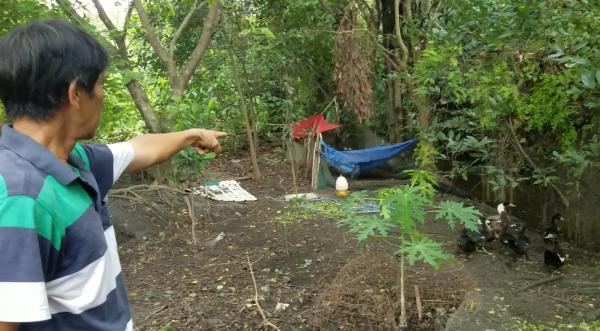 Mr. Son indicated where crocodiles appear in his garden

On the same day, a leader of Pham Van Hai Commune People’s Committee (Binh Chanh district) confirmed that there were crocodiles caught in the area, but the number of crocodiles has not been determined.

According to this position, currently in the commune above there are 2 units of crocodile farming under the management of the authorities. In which, one company raised more than 3,000 children and one household raised 73 children. However, the origin of crocodiles that people caught has not been determined because the neighboring area also has crocodile farming. “The commune is coordinating with relevant functional units to conduct surveys and field checks. At the same time, there are also strengthening documents sent to relevant units and people in Pham Van Hai commune, warning schools. dangerous match … “, the man said.

Pham Van Hai Commune People’s Committee recommends that people when detecting crocodiles in the area need to report to the nearest authorities to handle and avoid danger to the people.