Concern from the food, toys in front of the school 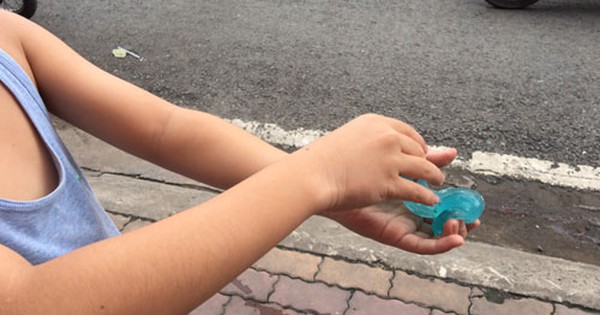 On April 16, Hoa Vang District General Hospital (Da Nang City) received 35 emergency students in a situation of difficulty breathing, abdominal pain, nausea … Department of Education and Training (Education and Training) Da Nang City said these were the students of Hoa Khuong Primary School (Hoa Vang district), the original cause was identified as being poisoned by playing water slime (a liquid toy, also known as “ghost slime). fuck “) buy at the shop on the way to the school. Before that, on March 16, students of Quang Trung Primary School, Vinh City (Nghe An province) suffered from stomach pain and nausea after drinking soft drinks with a fuzzy label, which were distributed free of charge in front of the school gate.

According to the Department of Education and Training of Da Nang City, a student at Hoa Khuong Primary School bought a water-type slime toy in front of the school gate, made and mixed it with preparations from groceries to sell to his schoolmates. When playing and smelling the smell from homemade slime, the group of students with signs of headache, abdominal pain, vomiting, difficulty breathing … were taken to the emergency room.

After this incident, leaders of the People’s Committee of Da Nang City requested City Police and related branches to strengthen inspection, supervision, and strictly handle violations of food safety regulations. In addition, the items that are usually sold to students must carefully check the origin and handle cases of imported toxic toys for children. The leaders of the People’s Committee of Da Nang City recommend that parents should restrict their children from bringing money to school, when buying toys for their children to pay attention to stamps, origin, should not buy floating goods, often remind their children. children about the dangers of unsanitary food safety in front of school gates

Slime is a toy that has been popular with primary school students recently, but is not safe

Not only in this school, many other schools across the country also have toys, foods of unknown origin, without packaging, and widely sold. Most of these items often have many eye-catching colors, flavors that stimulate the taste buds and attract students’ curiosity. The price also only ranges from 5,000 VND to 15,000 VND, so many students can buy it.

Ms. Ho Thi Xuan Thuy, whose child is studying at Le Van Tho Primary School (Go Vap District, Ho Chi Minh City), said that every day, she gives her child 10,000 VND to buy milk or snacks when she is hungry. One day I picked her up, she saw her holding a very strange toy, rubbery, soft like jelly, with many sparkling seeds, and asked that it was a new toy named slime and many of the classmates buy and play with. It smells good, but when smelling it well, it smells pungent, and there’s no manufacturer’s name on the package. Due to concerns about product quality, Ms. Thuy asked her children not to continue using them.

Similarly, Huynh Van Thanh, whose child is in primary school in Binh Thanh district (Ho Chi Minh City), often gives pocket money for his children to buy food in the cafeteria. Many times when he picked him up, he saw him buy dishes that were processed and sold on the street, and the grease had turned black. “In addition to fast food, I see many grocery stores in front of the school that also sell packaged foods in foreign languages ​​such as beef ribs, dried meat, spicy toothpicks, spicy chicken … very attractive colors. Which clearly states the origin, can not guarantee the quality, students are surrounded by chemicals “- Mr. Thanh said.

Ms. Tran Thao Nguyen, Principal of Nguyen Duc Canh Primary School (District 5, Ho Chi Minh City), said that the school cannot manage vending cars in front of the school gate, so parents must actively supervise their children when buy food, toys at school. The school’s teachers will observe their students, when they use strange foods and toys, they will immediately learn the origin, report to the local market management if the product shows signs of toxin. , danger. Each session under the flag at the beginning of the week, the administrators will remind and warn students not to buy dirty foods and strange toys.

For goods in the cafeteria, the origin must be clear, the goods are not for sale without labels, the origin is not clear, monthly report to the school about the items for sale. The good quality of the school canteen will limit the poisoning from food and outside toys for students.

The vice principal of a primary school in Tan Phu district (Ho Chi Minh City) said that students prefer to buy food and toys outside the school because of low prices, diverse designs, and in the school cafeteria, all items are clearly sourced. original but high cost. If you want students to limit the purchase of food and toys outside the school, they must adjust the price and improve the quality of the product.

Be careful with the slime

Slime toys have been sold at the grocery store, toy carts in front of the school in recent years. Slime is a more advanced version of clay, a mixture of soft and flexible, players can easily mold, stretching into many different shapes. If this toy is made from chemicals and additives with no clear origin, improperly mixed in the ratio, it can easily lead to poisoning when smelling.