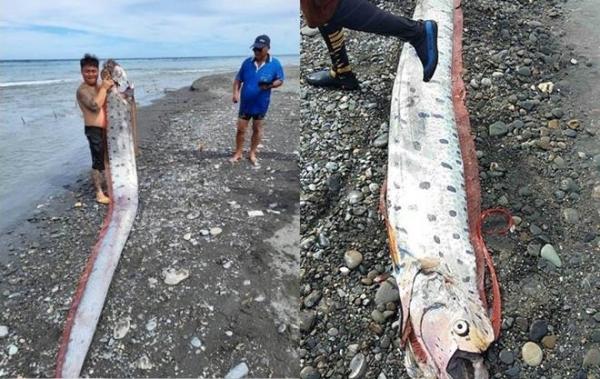 The moment he pulled the giant fish up, Lam and the surrounding fishermen were startled to realize that this fish was a king belt fish, also known as paddle fish, earthquake fish.

As soon as Mr. Lam caught the giant fish, other fishermen rushed to help, helping to fight with the rare “water monster”. It took up to 40 minutes for Mr. Lam and other fishermen to pull the fish ashore.

The moment he pulled the giant fish up, Lam and the surrounding fishermen were startled to realize that this fish was a king belt fish, also known as paddle fish, earthquake fish. Through measurements, the fish is 6m long, weighs 130kg, very rare.

Soon after, people flocked to take pictures as a souvenir, causing a stir. There are also people who are bewildered because there is a legend that the appearance of this fish will lead to earthquakes.

Regarding this, Mr. Ha Nguyen Hung, director of the Eastern Marine Biology Research Center of the Institute of Experimental Fisheries, Agricultural Council of Taiwan, said that the scientific name of the fish that Mr. Lam caught is Lampriformes, English name is giant oarfish. There is no scientific basis to show that this fish appears to be directly related to earthquakes, people need not be too worried.


However, many people are still afraid of the fact, near the end of September 2011, fishermen in Thanh Cong town, Taitung district caught a 4.6m long, 80kg oarfish in the waters near Tam. Thien Thai. On the 22nd, a 5.2 magnitude earthquake occurred in Hualien, next to Taitung.

On May 31, 2013, a 4.1m long oarfish washed up on the coast of Taitung. Coincidentally, a strong earthquake with a magnitude of 6.3 on the Richter scale hit Nantou on June 2.

On October 20, 2013, anglers caught a 5-meter-long oarfish on Taitung beach. On October 31, a 6.3 magnitude earthquake occurred in Hualien.

The owner of a seafood restaurant in Thanh Cong town said that the taste of earthquake fish was similar to cod, due to its low economic value, in the past, fishermen often directly threw away the catch. But in recent years, media coverage of this strange fish has attracted gourmets who want to taste the exotic seafood from the deep sea, now its value is much higher.