Caught a 200kg turtle, the trader paid 150 million people in the West who did not sell, just wanted to release 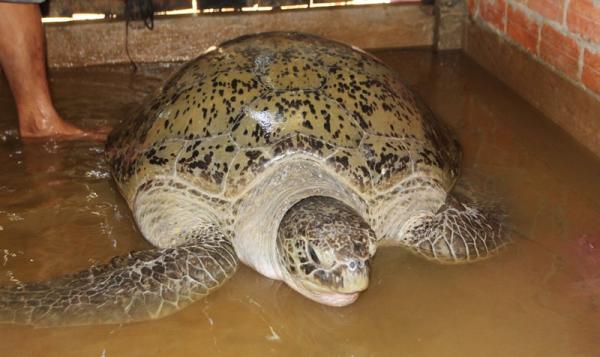 When fishing with rake nets at the Ham Luong estuary, Toan netted a sea turtle weighing up to 200 kg. After bringing it home, someone offered to buy a turtle for up to 150 million VND, but he did not sell it.

On April 9, the 63-year-old fisherman Pham Van Ren (living in Phuoc Ly hamlet, Binh Khanh Dong commune, Mo Cay Nam district, Ben Tre province), said that his family is temporarily raising a sea turtle weighing about 200 kg. His son Pham Van Toan caught the net. This sea turtle was asked by many people to buy, in which, the current highest price is 150 million VND offered by a man from Tien Giang province.

However, Mr. Ren did not sell, but only hoped that the state would support 20 million dong for fuel costs and repair the mouth of the rake that was torn by this sea turtle.

The sea turtle being temporarily raised by Mr. Ren’s family has a shell length of 1.2 m, a width of 94 cm, and weighs about 200 kg.

“I have been practicing trawl netting for nearly 40 years, but I have never seen an animal as big and strange as this turtle, and I do not know exactly what it is called. The government campaigned for me to release, but I also had to release it, but my family was also very difficult, I needed to support 20 million VND for fishing nets and fuel. Moreover, it is safe to have a sub-government release it, but if I bring it to release, other fishermen will also find a way to catch it again, “said Mr. Ren.

According to Mr. Ren, on the morning of March 6, 2018, his son Pham Van Toan, 38 years old, was fishing in the Ham Luong estuary area (Thanh Phu district, Ben Tre province) when he discovered this sea turtle lying on the ground. in the grid. Right after that, Mr. Toan brought this sea turtle back and had to rely on the help of 5 other forces to carry the turtle from the river to the house. 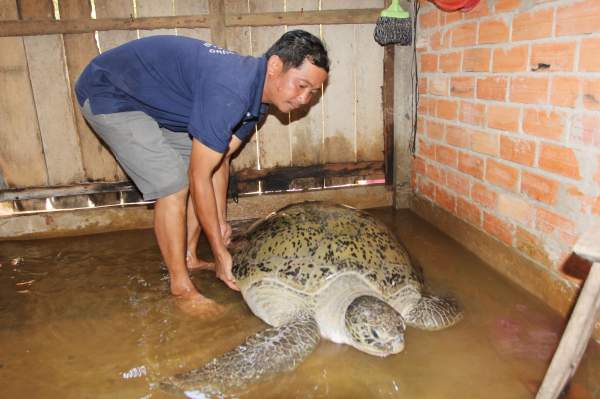 According to Mr. Ren’s family, for more than 3 days now, he has been feeding the sea turtle fresh fish, it loves to exercise and often makes a loud cry at night.

After learning that Mr. Ren’s family is keeping the strange animal, every day hundreds of curious people from all over the world come to see it.

Mr. Nguyen Van Doan, Chairman of Binh Khanh Dong Commune People’s Committee, said that after receiving the above information, the commune came to mobilize Mr. Ren’s family not to sell turtles but should temporarily keep them at home and wait for support to release the turtles. This sea turtle returned to the wild.

“We believe that about 90% of this animal is a snail (sea turtle) but we are still waiting for the experts to come to confirm it, and have also petitioned the authorities to consider supporting the cost of the fishing trip. for Mr. Ren’s family”, Mr. Doan said.

Mr. Chu Anh Khanh, an official at the Oceanographic Museum, under the Vietnam Institute of Oceanography, said that according to the provisions of the Vietnam Red Book, sea turtles in general are on the list of endangered species. Strict protection. If the fisherman catches them, they must be released back into the wild, if they have been brought back, the local Department of Agriculture and Rural Development must witness the release afterwards and that fisherman will not be supported with costs. Mr. Pham Van Ren and the mouth of the rake were torn by the sea turtle when catching it.