Birds set a continuous flight record of more than 12,000 km 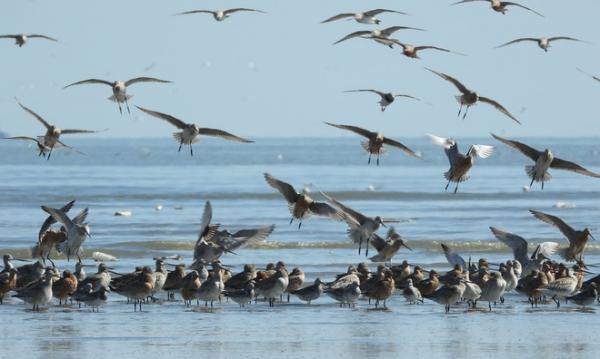 A species of striped tailbird has set a world record when flying continuously for 11 days from Alaska, USA to New Zealand with a distance of more than 12,000 km.

The striped-tailed hawk is referred to as the aerodynamic “jet fighter” bird that has set a new record in the animal kingdom. She began to leave Alaska, USA on September 16 and flew to a bay near Auckland, New Zealand 11 days later. It flew at more than 88 km / h, the Guardian said.

The beaked bird was named 4BBRW by the scientists, it is a male and has satellite positioning on its back to track its movement. 4BBRW is one of four birds that cut together from Alaska, where they have been together for 2 months.

Striped tailed birds usually weigh 190-400 g. It can double in size during long flights, but can shrink internal organs to reduce weight.

After leaving Alaska, the birds flew south of the Aleutian Islands and reached the Pacific Ocean. Their journey is prolonged by strong winter winds, pushing the group towards Australia.

Satellite data recorded their journey is 12,854 km long. The scientists assumed that after subtracting the error, their journey was about 12,200 km. The longest ever recorded direct flight for a bird was 11,680 km in 2007.

Dr. Jesse Conklin, from the Global Flyway Network – a group of scientists specializing in animal migration -ch said: “They seem to be able to self-identify where they are in the world. We can’t really explain this. It’s like they have a programmed map in the brain.

“They flew over the vast ocean for many days in the middle Pacific with no land or islands,” he added. Then came New Caledonia and Papua New Guinea, where there are quite a few islands. But they have a special ability to recognize land and land in New Zealand.

Scientists cannot be sure, but believe that the birds do not sleep during the journey that they flap their wings continuously most of the time.

“They have an extremely efficient level of energy consumption. Their appearance resembles a jet fighter. The long, pointed wings and beautiful shape give them many aerodynamic advantages, ”said Dr. Conklin.

4BBRW is one of 20 stripe-tailed ducklings captured and located in the Firth of Thames Bay, North Island, New Zealand by scientists at the Pukorokoro Miranda Seabird Center in 2019.

They are scheduled to begin their migration again in March 2021 and fly across Asia, where they will eat for about a month around the Yellow Sea, before returning to Alaska.

000 kmBirds set a continuous flight record of more than 12