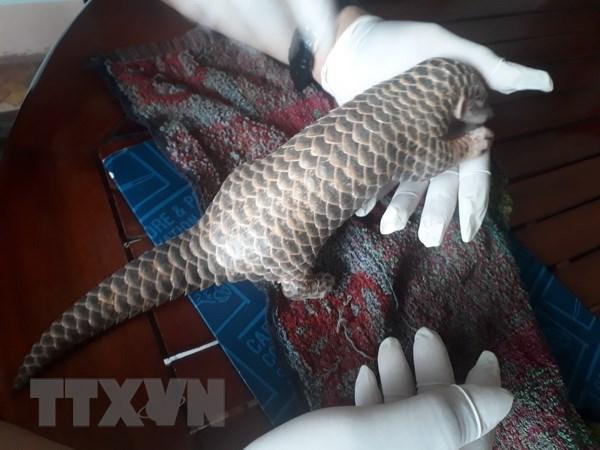 Hoai Nhon Town Forest Protection Department, Binh Dinh Province, handed over to the Center for Creation, Conservation and Development of Animals in Cuc Phuong National Park, a pangolin to take care of before releasing it into the natural environment.

On April 21, Hoai Nhon Town Forest Protection Department, Binh Dinh Province, handed over to the Center for Rescue, Conservation and Development of Cuc Phuong National Park, Ninh Binh province, a pangolin (voluntarily surrendered by local people) to take care of before releasing it into the natural environment.

According to Mr. Nguyen On, County Chief Hoai Nhon Town Forest Protection DepartmentThis pangolin was caught by local people while working in the local forest. Before that, the unit has widely propagated in the community about voluntarily handing wild animals when caught, so the local people are very aware, actively coordinating with the authorities.

Mr. Hoang Van Thai, officer of the Center for Rescue, Biological Conservation and Development of Cuc Phuong National Park, said that through initial assessment, this is an extremely endangered, precious and rare yellow pangolin. protected by the Law under group IB, on the list specified in the Government’s Decree No. 06/2019 / ND-CP dated January 22, 2019 on the management of forest plants, endangered forest animalsand implementation of the International Convention on Trade in Endangered Species of Wild Fauna and Flora.

Previously, on April 9, Binh Dinh Forest Protection Department coordinated with the provincial authorities to release 3 rare and precious animals to the natural forest at An Toan Nature Reserve, An Lao district. , pacify the province.

These three individuals are endangered and rare wild animals, including 1 loris, 1 mold monkey and 1 red-faced monkey voluntarily handed over to Binh Dinh Forest Protection Department. The unit has transferred these animals to the FLC Zoo Safari Park Quy Nhon for rescue and care according to regulations.

Mr. Nguyen Dinh Lam, Head of Division of Forest Management, Protection and Development, Binh Dinh Forest Protection Department, said: “When people hand over wild animals, release them to the natural environment as soon as possible. healthy animal. If the animal is injured, the unit will assign wildlife care centers for a while to restore health and then release it to the natural environment. ”

Binh Dinh Forest Protection Department has also instructed forest ranger districts to regularly propagate “5 no,” including: no hunting, no transportation, no trade, no captivity, no fruit use. wildlife and products derived from wildlife, contribute to the conservation of local biodiversity