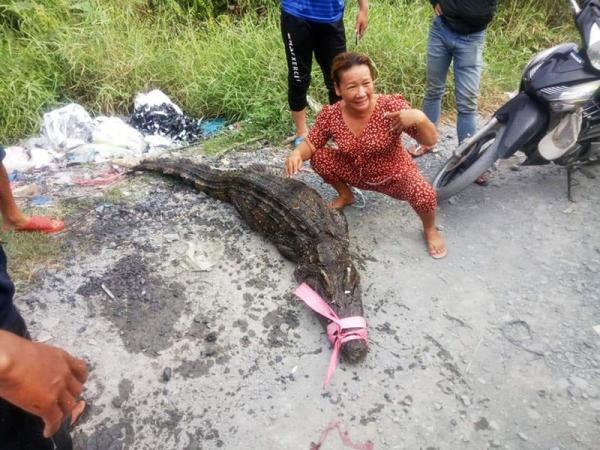 Many “giant” crocodiles, of which the largest one is about 80 kg, was captured in a short time by people in Binh Chanh district.

In the morning of the same day, Mr. Duong Van Thanh (41 years old) said he directly caught a “giant” crocodile in an irrigation ditch and raised fish in Hamlet 4. “About 14:30 on April 11, I I was going to feed the fish when I heard the goats and ducks chirping. Thinking of something, I ran out to see that the crocodile was stalking the goats ”- Mr. Thanh said.

The man thought it was a lizard or a python, but the dozen fire found that a crocodile longer than 2 meters was bared its fangs, so it jumped backwards. At a distance of about 10 meters, “the crocodile also saw that I should dive into the ditch, deep dive” – ​​Mr. Thanh said. The ditch is also a fish pond that the garden owner dug has a depth of about 1.6 meters.

In particular, the crocodile caught by Mr. Thanh in the garden weighs nearly 80kg, is more than 2 meters long. NT photo

Mr. Thanh said that despite his panic, he calmly “tried to destroy it, not let it escape because it would attack people at this size”, the image of a small child running and jumping in the yard made the man 1.6 meters tall. weighs nearly 60kg

The quick-witted man uses the family’s electric lighting to attack the crocodile. After about 5 minutes of thrashing, the animal weakened and was crushed and brought to the shore by Mr. Thanh and a neighbor. “I’ve never seen such a big crocodile in my whole life. It takes two people to bring it up. The neighbors also came running. When weighed up, about 76kg. I give each person a little meat to eat, and the skin is left to dry in the sun as a souvenir “- Mr. Thanh said.

The land of Mr. Thanh leased back to cultivate, raise a few goats, more than a thousand poultry, fish … is larger than an acre of land along Canal 5. Along the two sides of the cultivated land, there is a total of a few hundred meters long, both draining water and serving livestock. A number of times the chickens and ducks were lost, but it was not known whether the crocodile ate or not. 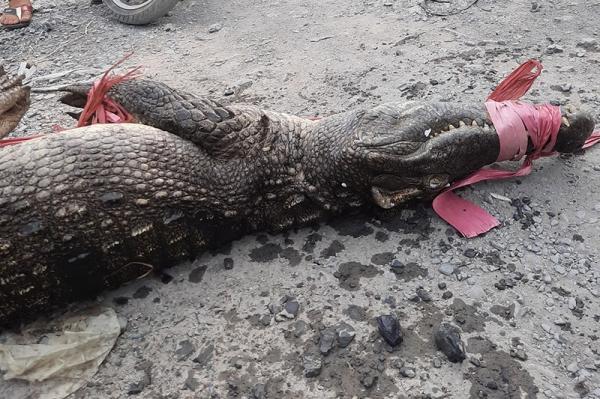 Next, a group of fishermen also discovered a crocodile weighing about 70kg in the forest. NT photo

Surrounding the land is cajuput forest, grass is taller than adults’ chest, flooded in rainy season. “My ditch is connected to Xang canal so water circulates, crocodiles can come here from there” – Mr. Thanh said.

A few hundred meters from where Thanh lived is the house of Mr. Nguyen Tan Son (61 years old). The man also said that about four months ago, he also witnessed crocodiles crawling ashore, hunting for domestic chickens.

People are worried about anxiety

“When it rains it comes in for prey, sometimes it comes into my house. Maybe this crocodile was raised by the barn to go to the forest and lay eggs or not “- he said. 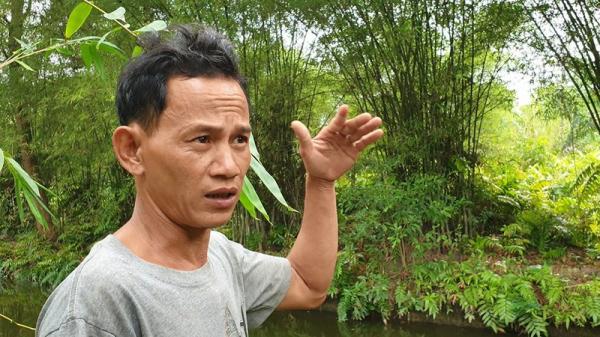 Mr. Son said he raised, at the peak, he dropped more than thousand chickens and ducks on an area of ​​nearly two square acres. “I was afraid it could catch chickens and ducks, I could only chase him away with a tree. It saw people chasing and then ran into the forest but nothing “- the man continued.

Mr. Son said that he has been here for about 10 years, crocodiles appear to catch chickens and ducks is a common thing as a meal. But “I listen to crocodiles with snakes I fear I run”. Mr. Thanh, after catching the crocodile, slaughtered the meat and shared it with people in the neighborhood. NT photo

Mr. Thanh said that children often play everyday. Personally, he often goes to the pond to feed and catch fish, so he is very worried. “The area is vast forest, there must be farmers. If they raise them, we hope they can build a good barn so that people don’t panic ”- Mr. Thanh said.

The man said renting the land for more than five years and discovered for the first time such a large crocodile. “Just afraid I can’t catch it, it comes out. I worry about me, my relatives because the crocodile is so big. Not happy for catching a crocodile, but happy for subtracting a threat for the people. Thereby warning people to be alert ”. 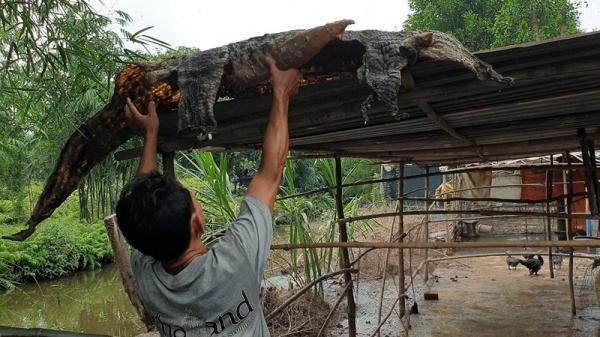 Particularly for the skin, the man said to leave as a souvenir. NT photo

Thanh’s neighbor also said that the big crocodile had never been seen. “I saw Mr. Thanh carrying a turtle cart into me with all my heart saying how he could catch it so badly. Feeling so scared, it is a predator. Only now found it in the zoo. There are children at home, so I am very worried. It is better for her to go to school but at home, she must keep it tight, ”said Ms. Nguyen Thi Tuyet, 56 years old. Mr. Thanh said that the area had never appeared crocodiles before. NT photo

“The loud crocodile heard the canoe beating, then rushed up the canoe. My brother was so scared to climb a tree to hide and call me to help ”- Mr. Tong said

Mr. Tong and another man ran to the branch canal area near canal 5 (Hamlet 7, Pham Van Hai commune) and used electric batons to catch the crocodile that had just been brought back on the boat. “The fish is very strong and looks hungry,” said the person. I work as a fisherman but I have never seen it in the wild, so scared ”.

The fish was then weighed about 70 kg and sold by Mr. Tong and his relatives for two million VND. “Then I went fishing and continued to find crocodiles in a nearby area. Also heard recently that people have caught many large crocodiles so they are very worried. If it attacks me, I do not know how, I hope the authorities will handle it ”- Mr. Tong continued.

According to Vice Chairman of Pham Van Hai commune, there is a unit and a household with a license to raise crocodiles with more than 3,000 children. “We have documents sent to the area as well as the people to warn and propagate when catching crocodiles, what should we do. It is necessary to report to the authorities, ”said the person.

Representatives of the People’s Committee of Pham Van Hai commune said that they have not yet determined where crocodiles are coming from, possibly in other areas.

During the day, HCMC Forest Protection Department also coordinated with Pham Van Hai Commune People’s Committee to go directly to the area to review and serve.

An official from HCMC Forest Protection Department said, through the image, it can be said that this is a freshwater crocodile or Siamese. This type lives in a natural environment, has a predatory instinct and can attack people if provoked.