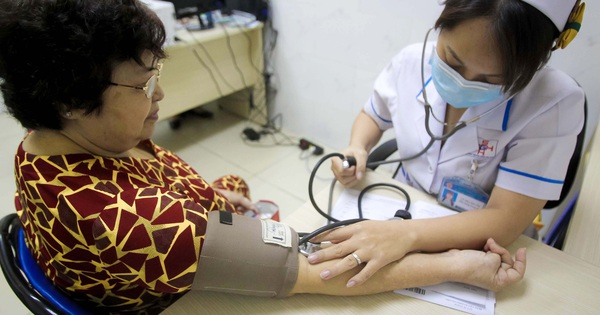 Having to go to the hospital (BV) to check because he was running gym, suddenly he felt dizziness, headache, palpitations …, Mr. Tran BT (50 years old; living in Go Vap district, HCMC) was surprised when the doctor BS) reported it was “dehydration, heatstroke, high blood pressure”, even though it was cool that day.

Sunstroke in the middle of the cold season

According to specialist doctor II Truong Quang Anh Vu, Head of General Planning Department of Thong Nhat Hospital (Ho Chi Minh City), the phenomenon of “heatstroke” can still occur in cool seasons, especially in the South, where the afternoon is still quite hot. The cause of heatstroke is not only hot heat, intense sunlight but also a combination of factors such as vigorous movement, long sun exposure time, dehydration, background disease …

“The first thing to do is whether the season is hot or cold, you should bring water when you have to go out for a long time, especially the elderly, already have blood pressure, diabetes … Bring water when thirst is supplemented. The next step is to avoid staying in the sun for a long time, especially in the midday sun even though the temperature is not too hot that day. If you have all three problems “hot weather – extreme exercise – dehydration” usually the body will react Two directions: One is the increase in body temperature, which increases body temperature, stimulates the heart to beat fast, increases blood pressure Second, the body tries to fight this by dilating the vessels, increasing sweat secretion to decrease body temperature. This again aggravates dehydration, reducing circulating volume, causing a drop in blood pressure … “- Dr. Anh Vu explained.

In addition, high blood pressure itself is a group of diseases that are easy to “turn over” when the season changes because the body has not yet adapted to the change.

The group of gastrointestinal diseases also often increases with changing weather, including digestive disorders due to spoiled food due to no change in storage, but mainly encountered during heat waves. After gastrointestinal disturbances are often stomach pain, the cause is due to the reaction of the sympathetic nervous system to the changes of weather, especially when it turns cold, which affects more or less the psychology of people. sensitive. People suffering from neuropathic upset stomach should also treat peptic ulcers at the same time and try to reduce stress. You can see a psychologist if the problem is out of your control.

Should check blood pressure regularly, because high blood pressure is a group of diseases that easily “turn over” when the seasons change. (Photo is for illustration only) Photo: HOANG Trieu

Experts warn that Ho Chi Minh City usually has … 2 seasons of respiratory disease. According to specialist doctor II Nguyen Minh Tien, Deputy Director of Children’s Hospital in Ho Chi Minh City (Ho Chi Minh City), the southern area is usually not too cold even at the end of the year, but the weather changes due to seasonal change, plus Some habits will be the causative agent.

“For example, during hot months or sudden heat waves, children and adults are susceptible to respiratory illnesses often because going out in the hot, turning on the fan, the air conditioning to cool down. Suddenly weakens the immune system so it is easy to be attacked by pathogens On cold nights, many people turn on the fans and the air-conditioning when they start to go to bed.But at midnight, the temperature will drop low even during cold or hot season “- Dr. Tien analyzed.

Dr. Nguyen Minh Tien noted that he is still in the peak phase of hand, foot and mouth disease, although it seems to be less than the beginning of the season, it cannot be ignored. Moreover, this is a disease that needs to be prevented all year round because there are still scattered cases outside the peak wave.

The hand, foot and mouth “seasons” can also vary depending on many factors. For example, this year’s “season” of illness, instead of March-May and October-December, lost the first peak, starting to increase slightly since July. learning is disturbed, and frequent hand washing to prevent Covid-19 also helps to prevent this disease. Dengue fever is similar: less dry season, but more severe cases. So, here are 2 diseases to be careful of year round.

Another note is that exercise hours should also be changed appropriately, it is best to wait when there is mild sunlight early in the morning, so it is both warmer and also time exposure to sunlight, which is necessary for The body synthesizes vitamin D. Above all, maintaining healthy eating habits, regular exercise, daily exercise … will help the body have better resistance, improve background health, copes with changing weather, helps to control chronic diseases well.

Dr. Truong Quang Anh Vu recommends that in days when the weather becomes unusually cold, dark and long in the morning, the elderly should carefully monitor the weather before going out to dress appropriately and keep warm. body.