Basketball, Serie A: Milan does not miss a shot, Virtus Bologna falls at home 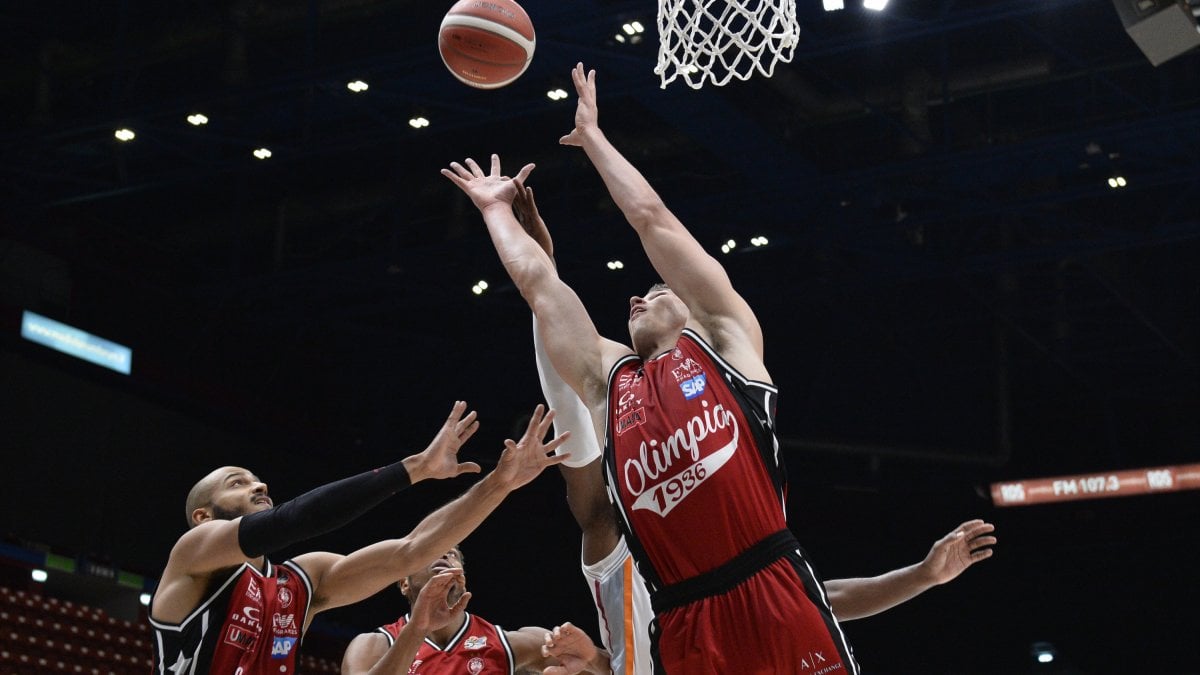 ROME – Four out of four wins for Olimpia Milano which overwhelms Rome despite numerous absences and remains firmly at the top of the standings. Behind the Olimpia the trio formed by Brindisi, Sassari and Venice follows. The Apulians have the better of Treviso, the Sardinians win a comeback against Fortitudo Bologna, the lagoonians conquer Cantù. The Sagafredo who falls at home against Reggio Emilia does not keep pace. In the postponed home success for Brescia against Trieste.

Olimpia Milano overcomes the ill-fated Virtus Roma in spite of numerous absences. Without the long-term residents Micov and Punter, without Delaney injured in the cup and with Hines battered (only 5 ‘for him), Ettore Messina’s team imposes itself with a clear 93-71 after having effectively closed the Capitoline practice already in the first half. At the Forum the AIX goes to the long rest on +23 (53-30) immediately touching +30 during the third fraction (77-47). The last quarter Milan lets go allowing Rome to limit the damage with Robinson and Wilson, but the hosts are in full control of the match and always keep the guests at a safe distance.

Virtus Bologna still falls at home and surrenders to Reggio Emilia 77-67 and loses the train chasing Milan at six points. Djordjevic’s men start well, manage the red and white sortie in order and close the first half 6 points ahead (24-18), but then UnaHotels wakes up and the match changes face. At the long break the guests are just 2 points ahead (44-42), the third quarter is played point by point and confirms the perfect balance between these two formations, then in the last quarter Virtus jams and Reggio thanks: + 11, detachment that will last until the end.

Third victory in a row for Brindisi

Third consecutive victory for Happy Casa Brindisi who, after an unwatchable first half, lights up in the second half, comeback and beats De ‘Longhi Treviso 99-73, the third knockout in a row. The guests also touch +16 during the first half, then when they return from the locker room they collapse inexplicably with the biancazzurri who, dragged by an extraordinary Harrison, overturn the results of the match. The contribution of Perkins, Bell and Willis was also decisive.

At the PalaSerradimigni of Sassari, Dinamo first suffers, then in the final minutes they recover and overturn the results of a match apparently already written in favor of Fortitudo Bologna. The Sardinians, who can count on Justin Tillman’s contribution for the first time in this championship, win 89-86. To drag the men of Pozzecco we think the Sardinian play Spissu, author of 22 points (8/8 to free), 3 rebounds, 5 assists and 3 steals, and Miro Bilan on the scoresheet with 18 points and 11 rebounds. Dinamo overturns the challenge in the last quarter, with a run of 29-18. Mancinelli’s triple was empty at the end which would have sent the two teams to overtime. Many regrets for Effe, pushed by the Banks-Aradori couple (43 points in two).

Reyer Venezia returns to victory and passes, to the sound of triple, at Cantù’s home for 75-67. After two losses in a row, the team of coach De Raffaele gets up and manages an initially balanced match with experience. The lagoons close the first quarter on 25-16 and then expand their advantage during the second set. At the interval along the scoreboard reads 43-27 Venice. Not even the break of 11-4 placed on the return from the locker room by the hosts breaks Reyer who returns to score from three and manage the advantage until the final siren.

Nothing to do for Trieste, the second defeat in a row, which yields at home to Germani Brescia: ends 75-63 for the hosts. Excellent departure for the Lioness who, even without Cline (injured) and Kalinoski (positive buffer) flies in the first half also reaching an incredible +28. Then, however, in the second half the Allianz, thanks to Alviti (14) and Doyle (18), makes up for it while not bothering too much the hosts put the match on ice with Crawford, author of 18 points. Burns was also decisive, on the scoresheet with a double double (17 points, 11 rebounds). A success that allows Brescia to hook Trieste in the standings.