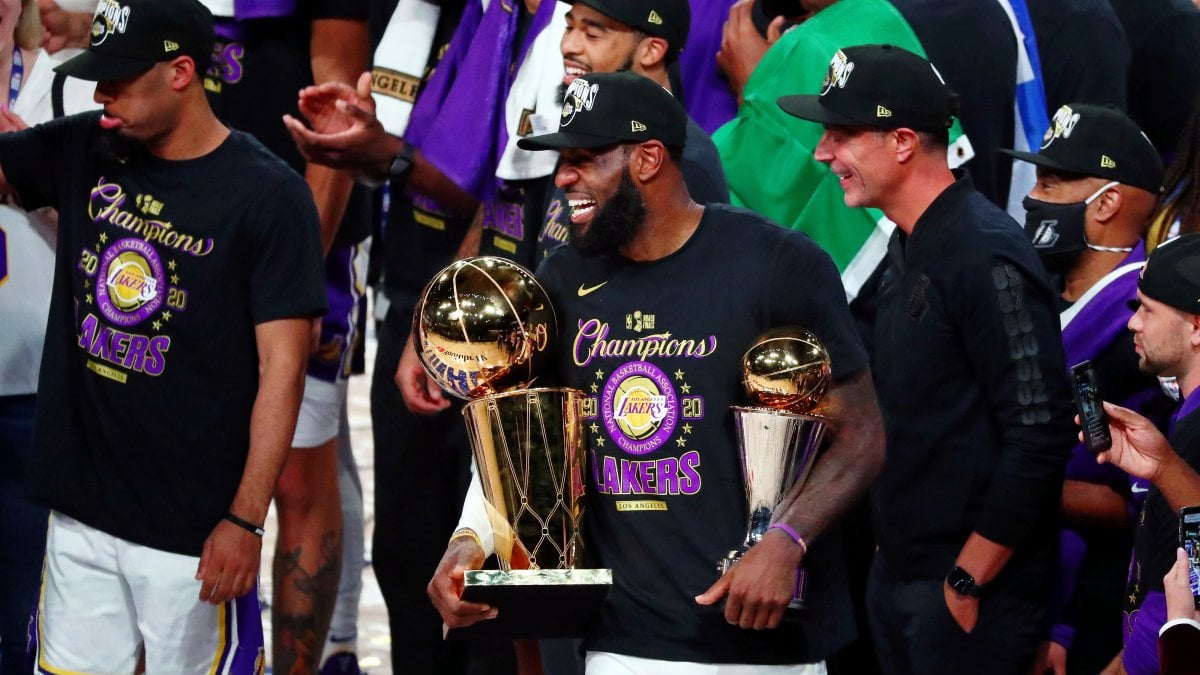 When there are fifty seconds left before the triumph and the cascade of confetti, two players of the Lakers they celebrate away from the field, behind one of the baskets. LeBron James tightens from behind Anthony Davis with a long hug that holds the key to this season. The best matched couple of the last twenty years brings the Los Angeles Lakers to the 17th title in history and a man in the Pantheon of the greatest ever. At 35, LeBron becomes the first in history Nba to win the title of Best player of the finals with three different jerseys, the only one with more than 25 points on average in the playoffs with three franchises. LeBron, increasingly The King, has joined Michael Jordan and Bill Russell as the only ones in history to win the mvp title in at least four finals and in the regular season. But since no one, not even the absolute master of the championship, can win alone, even LeBron knows that he has made history thanks to Davis, the first NBA title of his career, thanks to Rajon Rondo, and all the others, who have redeemed themselves from numbness that had allowed Miami to keep the series open.
Finals Nba, the Lakers win the ring. Miami surrenders, LeBron Mvp

Two days before the dramatic final of Game5, when Danny Green had missed the winning shot after receiving the ball from LeBron, this time the dilemma did not arise as to whether The King would take responsibility for the decisive shot. Game 6 was a show of power by the Lakers Nation, again tremendous in defense, able to keep the Heat at only 58 points at the end of the third quarter, and win at the end 106-93 after closing the interval at +28 (64 -26). “You made a masterpiece defense,” coach Frank Vogel told the team in the timeout before the fourth fianle, in his first triumph as a coach.

Nba basketball; Lebron in history, as an authentic driver: this is how he collected the legacy of Bryant

The great defense, as per the textbook, made the attack more fluid. This time everyone’s support arrived also in the points: LeBron’s 28 points (plus 14 rebounds and 10 assists) were joined by 19 from Davis, 11 from Green, 17 from Caldwell-Pope and 19 from Rondo. Miami, who found Goran Dragic, crashed into the wall of white shirts: Jimmy Butler stopped at 12 points (6 out of 12), Duncan Robinson at 10 (6 out of 15), the young revelation Tyler Herro closed for the first time a playoff match without going into double figures. For him only 7 points and 4 baskets made on 12 attempts.

Adebayo’s 25 points are the result of Los Angeles’ defensive choice, which thought more about containing the other rocket players, capable of upsetting the balance. Stop them, the game took a definitive direction from the beginning. With the passing of the minutes, and with the gap that soon widened towards twenty points, in Miami all the weariness of these ninety-six days of basketball in the Disneyland bubble has subsided. One figure is enough: the unusual 59.1 percent go to free, with 13 hits out of 22 attempts. But if this final was beautiful it is also thanks to the heart shown by the Heat in the first five matches and to the genius of his coach, Erik Spoelstra. To think that Los Angeles and Miami a year ago had not even entered the playoffs.

The awards ceremony follows tradition as if it were a normal season: commissioner Adam Silver, the other big winner of the evening, able to bring 22 teams and 1300 people to Disney and complete the season without a single match postponed for the Covid, celebrates the Lakers’ victory, remembers Kobe Bryant, reaffirms the civil commitment in the sign of Black Lives Matter, thanks all those who fought on the pitch, and helped themselves out, respecting the strict health protocol, because the show continued. And so it was. This final, even if played in a bubble, with the virtual public, was proof of this: a formidable and real basketball was played. The choreography, the audio effect and the plays have made us forget the pandemic. Only the NBA, which confirmed itself as the most organized sports league in the world, could do it. Maybe it can be an example, maybe it never will be. We’ll see.