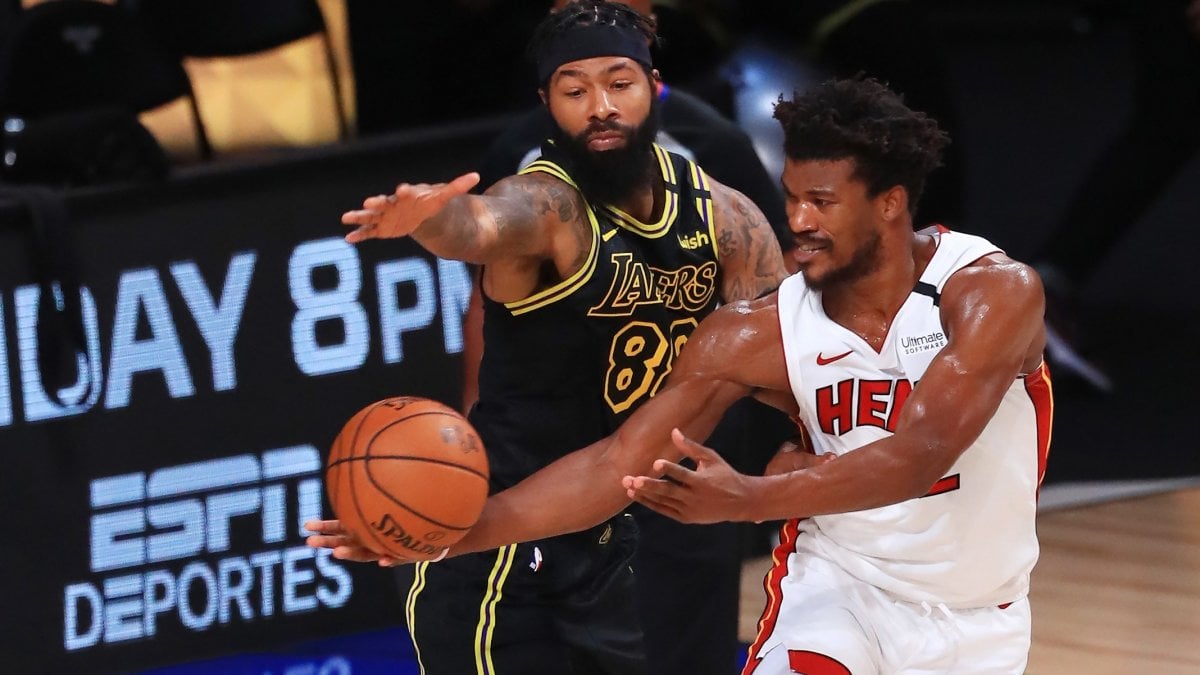 The best championship in the world, the only one left immune from Covid, did not finish yesterday. Bad news for the Los Angeles Lakers but sweet for all basketball fans. Miami keeps the series alive by winning 111-108 a crazy game 5, played by the Heat with only seven players, controlled for three quarters and almost lost with 5 ‘from the end, with Los Angeles – now ahead 3 to 2 – above three (99 -96) and the foul in attack by Duncan Robinson. The Miami players looked dead, drained of energy. The cameras had framed the trunk with the trophy inside, some of the ninety guests in the stands began to think about where they had left the car.

Destiny seemed to be fulfilled in the sign of Kobe Bryant: the amulet uniform of Black Mamba, the golden Kobes on the feet of Anthony Davis. But all the symbology dissolved in front of the big heart and courage of Miami, led by a monstrous Jimmy Butler, 35 points, 12 refunds, 11 assists and surrounded by a team of wild madmen: the 13 points of Adebayo, the 11 of Crowder, Robinson’s 26, Nunn’s 14 and Tyler Herro’s 12, 20, who scored the final two free throws with the coolness of a hitman.

It was a game where they both scraped the bottom of the barrel: if Miami only put seven players in the rotations, Los Angeles employed nine. It could have been a painful game, it was the best of the series. The collective urgency of Miami, forced to win, got the better of the class of LeBron James, who showed up at the Disneyland arena wearing a jumpsuit printed with the tricolor, the slogan “fusilli, palazzo, come family” and the name of an Italian restaurant in Los Angeles, Jon & Vinny’s. On the field LeBron has “cooked” 40 points with 15-21 shooting, 6-9 from three, plus 13 rebounds and 7 assists. With him a lot of Davis (28 points), a lot of Caldwell-Pope (16) a little of Kuzma (7) a little from the others and, for the first two quarters, very little defense. At half-time Miami had finished four 60-56, showing the reason for the evening: the duel between LeBron and Butler.

There was room for a couple of emotional shocks: the initial fight between Butler and Dwight Howard, good at pausing for a second before punching each other and the injury to Davis, who remained on the ground after a rebound, holding his heel. Everyone thought about the broken Achilles tendon, like Kevin Durant in last season’s final. Instead, Davis returned. But the theme of the match hasn’t changed. Miami held up the comparison because it was more reactive under the basket, good at exploiting the systematic void left by the Lakers in defense at the free-throw line. Worry about limiting Adebayo and the bow snipers, or you play six or something you have to give up. There the Heat struck, widening the Lakers’ defensive uncertainties and gaining confidence. 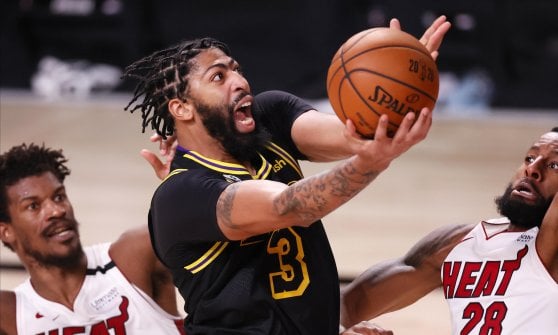 The second half went on like the first, always with Miami also ahead by 11. Until the energy of a team, already without Goran Dragic, ran out and the basket became invisible. The Lakers took the opportunity to gnaw the gap, up to overtaking with a three-shot from the glacial Caldwell-Pope (97-96) with 6’18 ” from the end and two more points from Pope for 99-96.

The last two minutes have been dramatic. The match at the beginning of the match is back: everyone has disappeared, teammates, referees, benches, virtual fans on the screens. And they remained: LeBron and Butler. Davis had begun to limp. Butler’s shot bounced off the iron twice, then the Texan made a comeback (101-103). LeBron responded with a three-point game (104-103), Butler signed the new overtaking (104-105), LeBron brought Los Angeles back (106-105) with less than 50 seconds to go. Butler put in the free throws (106-107), to which Davis replied, standing still, with the basket at the end of 24 ” (108-107). It was 21 seconds and 8 tenths. Butler took a foul, went to the free again and brought Miami back to +1 (108-109). The last action was in the hands of the Lakers and we all thought about Kobe. LeBron, in penetration, attracted the opponents on himself and discharged for Green, only from the bow: he had to do the Kobe, but he was trivially Green. The final shot proved disappointing, and ended up short. In the overturning Miami has put the seal with Herro’s free. Sunday new appointment for night owls. The Lakers have always reacted after a defeat, but Miami, after 94 days in the Disneyland bubble, still doesn’t want to go home.