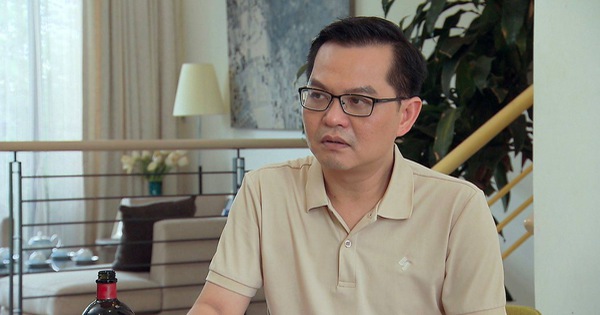 Artist Trung Hieu in the movie Peaceful Tomorrow. In addition to him, the film has the participation of actors: Thuy Ha, Kieu Anh, Quoc Tri, Tien Minh, Kieu My, Quang Trong, To Uyen… Photo: VTV

As the owner of a construction business, he has to try to maintain the company’s operations while handling family matters, especially with his two growing daughters…

Through 15 episodes, the most impressive character was Mr. Phat – who was voted by many viewers as the “national father” because of his sincere behavior with his family.

The success of this role is largely due to actor Trung Hieu’s close and gentle acting. Although he did not appear for 7 years, he was still praised by the audience for his acting “top of the top” and “never disappointed the audience”.

Sharing about the role of Mr. Phat, artist Trung Hieu said: “I sympathize with Mr. Phat very much. As the director of the Hanoi Drama Theater, I am also stressed and worried about the lives of artists during the season. They work very hard, most of them have difficulties”.

He added: “I also like Mr. Phat because he has many interesting things in how to teach his children. When staying at home during the time of separation, through so many conflicts arising between father and son, husband and wife, he gradually understood his children and his wife…

The film thereby reminds us that in addition to social work, we must take care of our family more. Life needs sharing in the community to overcome difficulties together.”

Choose Peaceful tomorrow As a TV series returning after 7 years of absence, artist Trung Hieu shared the reason: “The recent Vietnamese films are long, so the filming time sometimes lasts more than half a year. I can’t arrange work at home. sing so I can’t participate.

I was invited to film during the COVID-19 pandemic, the theater was closed, so I was also free.

On the other hand, this is a family psychological film associated with the social issue of fighting the COVID-19 epidemic, so I happily participated with the desire to contribute to creating a film that entertains, encourages and encourages Mrs. children, the frontline force against the epidemic.

Seeing people in the South struggle against the epidemic, I feel so sorry!”.

Returning to the small screen after 7 years of absence, artist Trung Hieu made an impression with the role of Mr. Phat, the director of a construction business who is facing many difficulties because of the COVID-19 epidemic, in the film. Peaceful tomorrow.