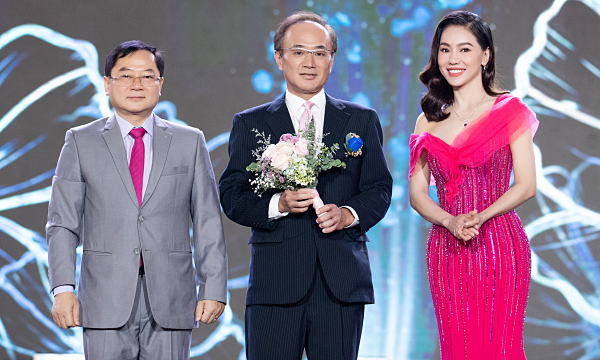 On the evening of October 10, the semifinal night of the Miss Vietnam 2020 pageant took place at the Palace of Athletics, Hanoi. The night of the competition was attended by a series of beauty pageants, runner-ups, famous singers and the companion of diamond sponsor – Aqua Vietnam.

In nearly three hours, the top 60 semi-final round contestants across the country, respectively, underwent 3 performances of Ao Dai, bikini and evening gown. After that, 35 excellent girls were named to advance to the national finals.

In addition to the Miss Vietnam, the runner-up and the Vietnamese stars, the National Semi-Final night also has the participation of the sponsors who have been with Miss Vietnam 2020 during the past time. As a companion of the contest since the first start of the press conference, as a diamond sponsor, Aqua Vietnam has contributed to the competition organizers to bring a successful semifinal night.

Mr. Yuyo Murakami – Managing Director of Aqua Vietnam, representative of diamond sponsor said It’s an honor that Aqua is part of an event of a national level. The semi-finals of the contest attracted a lot of misses, celebrities, media and guests to attend. This is a proof that the Miss Vietnam 2020 contest has been receiving great attention from the public.

Commenting on the candidates selected to the national finals, according to Mr. Yuyo Murakami, the jury has its own criteria for selecting worthy candidates, but he believes that it is a combination of many aspects. edge: body beauty, knowledge and heart for everyone. The winner will be the most suitable, able to represent modern Vietnamese women, not only beautiful in appearance, but also intellectually intelligent to inspire the world to understand more about Vietnamese culture and people. Male.

After the national semi-final night, the Top 35 excellent contestants will enter the journey of implementing charity projects across the country, before taking part in exciting auxiliary competitions and preparing practice. for the national finale.

Accompanying many generations of Vietnamese families for nearly 25 years, Aqua Vietnam said that customers always use satisfaction as a development goal. With the message “Inspired Living – Inspired Living”, Aqua has been accompanying the Miss Vietnam contest as a diamond sponsor, contributing to bringing Aqua brand closer to consumers. country.