All medical services will be made public 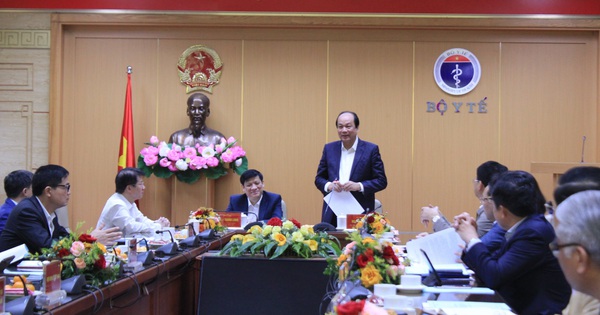 Minister, Chairman of the Government Office Mai Tien Dung speaking at the meeting with the Ministry of Health

Minister of Health Nguyen Thanh Long said that in the past time, despite straining against the Covid-19 epidemic, the Ministry of Health is determined to promote administrative reform, IT application, digital transformation … In the industry, initially, there have been positive results. One activity with the strong application of information technology that the health sector will deploy in 2020 is remote medical examination and treatment. Up to now, there have been 1,500 connected bridge points, some countries have applied to connect with Vietnam for medical examination and treatment together.

According to Mr. Nguyen Thanh Long, digital transformation has also been drastically implemented by the Ministry of Health. On November 20, the Ministry of Health will officially open the Public Health Portal. Accordingly, all medical services will be made public. In which, 60,000 drugs, all medical equipment circulated in Vietnam, 28,000 kinds of functional foods have also been made public, including in public advertising, towards the publicity of selling prices. At the same time, all medical services of medical facilities will also be open and transparent.

The coming of the Ministry of Health will also open two platforms, the Vietnam Health Network, and open the electronic operating software at 12,000 commune health stations. In particular, Vietnam Health is the network that connects more than 500,000 health workers across the country to exchange and share information and expertise. From 2021, the Ministry of Health will officially put into use more than 90 million personal health records. Also in 2021, the Ministry of Health will carry out paperless outpatient examination and treatment with about 120 million records, including the medical record for the driver’s license. The health sector has been and is strongly participating in the digital transformation revolution. Applying AI (artificial intelligence) in diagnosing and treating some lung diseases, taking film …

The Ministry of Health has issued a project on pilot implementation of building, connecting, and sharing driver health check data with the Ministry of Transport according to the roadmap for the service of issuing and countering driver’s licenses. Level 4 service on the National Public Service Portal in Hanoi and Ha Nam Province. As of October 31, the total number of issued driver health certificates and linked up to the national database was 7,342 votes. To date, 20 hospitals under the Ministry have implemented electronic payments.

Speaking at the meeting, Minister, Chairman of the Government Office Mai Tien Dung highly appreciated the achievements of the health sector in implementing the assigned tasks. The Ministry of Health is requested to make efforts and determination to complete the assigned tasks in the spirit of not letting any tasks be overdue or incomplete. Recognizing the recommendations of the Ministry of Health, Minister Mai Tien Dung also suggested ministries and agencies to pay attention to, support and coordinate the implementation.