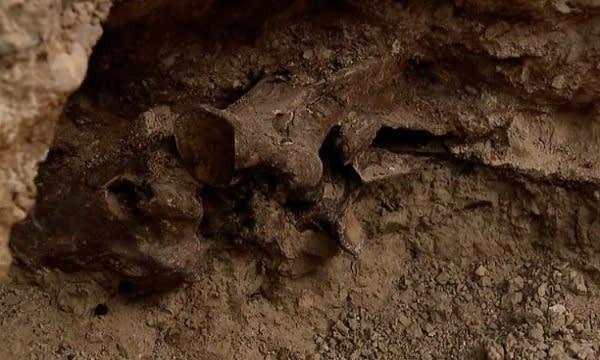 Workers dug skeletons in the yard of a family home in Las Vegas, belonging to a horse from the Ice Age.

Host Matt Perkins said they found the dead horse on the morning of May 2. It only took the police a few minutes to conclude that it was not a human remains. “They dug the skeleton and told us it was too big for the size of the human body,” Perkins said.

Because of curiosity about the origin of the skeleton, the Perkins contacted paleontologist Joshua Bonde, director of research at the Nevada Science Center, to ask him to check. Bonde identified the fossil as a prehistoric horse.

The right shoulder blade, right leg bone and part of the animal’s spine were revealed. The bones are still connected together and in the same position as when the horse was alive. It was rare, according to Bonde, showing that the horse was buried quickly before the hungry scavengers dispersed its body. The fossils lie at a depth of 1.2 – 1.5 m. The Perkins also found the horse’s jaw, rib cage, and spine bones in a pile of dirt dug from the pool 2 meters deep.

The evidence suggests that the horse lived in the Ice Age 6,000-14,000 years ago. Researchers at the US Geological Survey will examine the specimen to conclude exactly when the animal died. The site of the fossils was found not far from Tule Springs Fossil Beds National Monument and Ice Age Fossil Park. At the time of the horse’s death, the area was a swampy area, inhabited by mammoths, camels, saber-tooth tigers, wolves and many extinct mammals.

The Perkins family decided to stop building swimming pools to give researchers time to excavate and preserve fossils. They will donate the fossils to the Nevada Science Center for research and display.